Home News FTL: Faster Than Light Coming To iPad Early Next Year Along With... 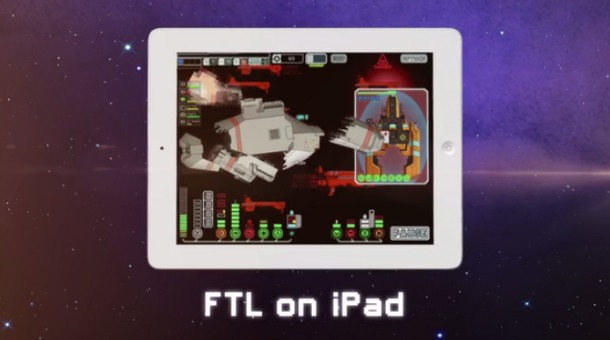 Developer Subset Games’ popular 2012 indie title FTL: Faster Than Light is officially getting an iPad port along with a new content update early next year according to the development team.

The new update, titled “FTL: Advanced Edition”, will bring with it a whole slew of features such as new weapons, enemy types, an entire new sector along with new playable events, and even two brand new gameplay systems; hacking and mind control. The Advanced Edition update will be completely free and will be available on all platforms; Windows, Mac, Linux, and now iPad as well.

The iPad edition will, naturally, be optimized with touch-based controls and will include all of the content from the base game along with the new Advanced Edition features. An iPhone version was originally planned as well but sadly Subset had to pull the plug on it due to the phone’s small screen which made gameplay difficult.

For more info on the game’s Advanced Edition (including a short teaser trailer), check out FTL’s official website. Both the iPad version of the game and the free Advanced Edition update are currently slated for an early 2014 release.

FTL: Faster Than Light Coming To iPad Early Next Year Along With Expansion