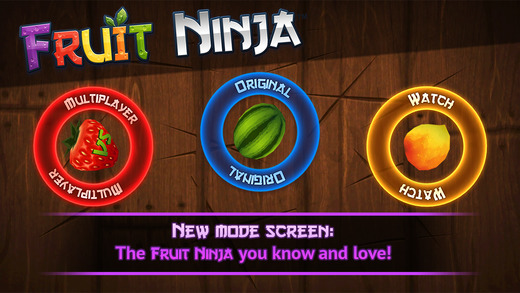 Fruit Ninja is a game that need no introduction, as it’s one of the more popular smartphone games ever released. Halfbrick Studios has released several updates for their popular game in the past, tweaking the experience considerably, and another upate has been made available recently just in time for the Holidays.

The new Fruit Ninja update comes with plenty of new content and features suchb as a new Level Cap, with players now being able to unlock 100 levels, new rewads for completing missions and the return of the classic interface. The biggest change introduced by the update is the removal of the game’s premium currency.

What’s New in Version 2.3.3
The premium Fruit Ninja experience is back. Let’s do this!
NEW LEVEL CAP – The bar has been raised! There are now 100 levels to unlock, including some extra juicy surprises!
SAYONARA, STARFRUIT – Premium currency is no more. Cash in your existing stockpile to level up and unlock swag galore!
MISSION REWARDS – Completing missions now unlocks power-ups. Hiiii-yah!
CLASSIC INTERFACE – The celebrations are over but the party never ends. We hope you enjoyed the event!

Fruit Ninja is now available for purchase on the App Store.