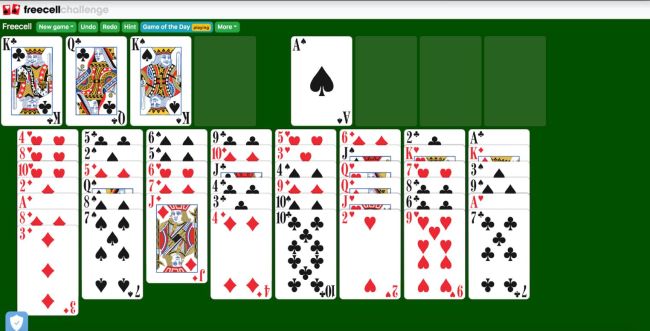 You’re not supposed to have a favorite, but we can’t help it. FreeCell is the best version of Solitaire.

Sure, it’s good to have options. There are literally hundreds of different Solitaire variants to pick from, and some are bound to appeal more than others, depending on your mood and who you are. But FreeCell is the best, and sometimes you just want the best, with no distractions.

That’s what FreeCell Challenge gives you. Created by Darshan Somashekar and Neal Taparia – the team behind the awesome online card game compendium Solitaired – FreeCell Challenge is a stripped down, slickly presented FreeCell game with a gorgeously clean interface and a couple of neat tricks up its sleeve.

In case you’re not familiar, FreeCell is a form of Solitaire in which all the cards are face-up from the outset. As with Klondike, the most familiar Solitaire game, you need to arrange these cards into sequential red and black columns by carefully shuffling them around.

There are four vacant “cells” that you can temporarily store cards in, allowing you to reach the cards locked behind them. But only four, and the number of cards you can move is dictated by the number of empty cells you have.

Reaching the end of a game of FreeCell is always a tricky proposition, since it’s infuriatingly easy to run out of moves and jam yourself up. That’s exactly what makes it such a great version of Solitaire: it keeps you on your toes.

Like Solitaired, FreeCell Challenge lets you pick your own card designs, choosing from ornate classics like the Jones set or the iconic Parrots. Or you can go with decks that celebrate various human achievements throughout history.

There’s a deck celebrating women’s suffrage, made in partnership with Encyclopedia Britannica; a deck of notable inventors made with MIT’s Lemelson programme; a deck commemorating the towering accomplishment that was the 1980s, and many more.

You can play FreeCell for free now online. Plus, the team has just released a version for Android, which you can download here.