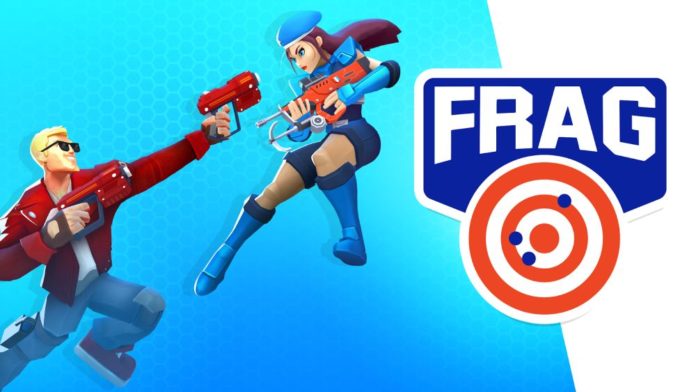 Oh BiBi’s FAG Pro Shooter for mobile is an extremely fun and fast paced shooter with MOBA elements, great graphics and a ton of unlockables. And we’re here to help you get better at this game by sharing a bunch of FRAG cheats and tips in today’s strategy guide.

Although not insanely original in terms of concept, the game does a good job at delivering fast paced action and tons of options thanks to its ton of unlockable heroes – and you’ll play as different fighters in each match, which is a really interesting approach to the genre.

But let’s see what can be done to play better, win more often than not and unlock all heroes for eternal glory! Let’s check out below our Frag Pro Shooter tips and tricks!

Work as a team
Unlike other MOBAs where each player controls a different character, in FRAG you are playing together with bots and only control one of the team’s members. 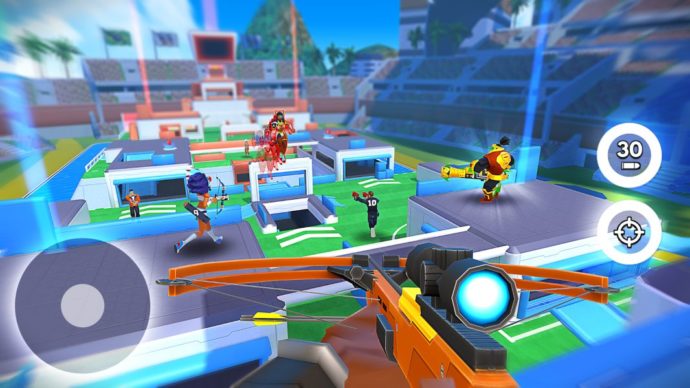 This makes things a lot more interesting (especially since your opponent is in the same situation) and working as a team is extremely important because a skilled human player can easily wipe out three of your bot teammates without breaking too much of a sweat.

So always stick together and use the different options you have available in the game to issue instructions to your teammates (like attacking a specific target or defending a specific one).

An interesting strategy that I have found out to be working on most occasions is to go lone wolf style towards a target and instruct your fellow teammates to attack another. This is a strategy that’s usually difficult to be dealt with by the opponent and it does pay off, resulting in a lot of damage being dealt relatively fast although it’s also risky.

All in all, if you want to play it safe, stay close to your team and try to work as an unit.

Learn the important spots in the arena
Each map that you play on has some important spots where special items are constantly spawned (the health regens), or areas where you can hide behind a wall and jump out to take an opponent by surprise. 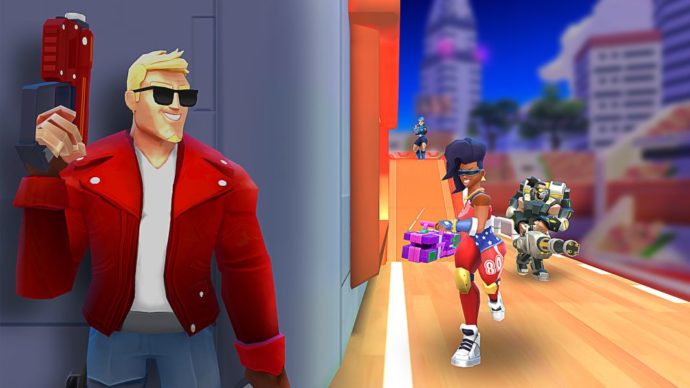 Take some time to explore all areas of the map, keeping in mind the locations of the important spots and using them as often as needed.

FRAG Pro Shooter is a game where you generally go head first into battle, as quickly as possible, so you won’t do a lot of camping and waiting around – but sometimes taking a second or two to draw your breath can make the difference between winning and losing.

Team setup to keep winning
The default team setup in the game is 3 attack characters, 1 Camp and 1 Defense. However, you don’t have to follow the same route and you can have any set of 5 characters you wish.

Next, it’s up for you to decide the right balance of Attack and Defense characters. I personally go with 3/2 or 4/1 depending on what I have unlocked, with the former being my favorite so far. However, I believe that you could have a lot of luck with 5 attackers as well so experiment a bit and see what works well for you.

Remember that you won’t play a single hero during a match, so you should be comfortable playing any of them! 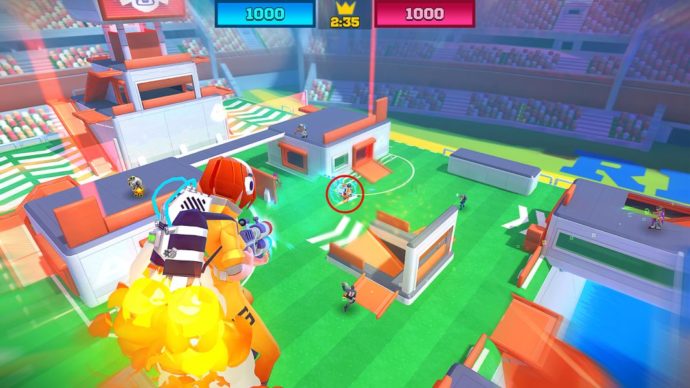 How to unlock more heroes
Unlocking more heroes is easy in theory but a bit more complicated in reality. You get more heroes by unlocking new chests that you earn from winning arena battles, which take time. You also get them as rewards, mostly if you have a Season Pass or through other IAPs.

We’ll have a more detailed guide on unlocking the heroes, but the golden rule of thumb here is that if you want to go full free to play, the Arena Chests are your friend.

Know your starting heroes
It is extremely important to know the skills of all the characters in your team in order to be able to easily take advantage of them when you play as one or another.

The skills are what makes the difference mostly, as they are all pretty much similar in terms of stats (HP mostly) when it comes to general rankings. Things change when it comes to the weapon they use, the damage they deal and how the weapon works: a pistol that shoots fast has to be controlled differently than a rocket launcher that has a delay before the rockets reach their destination.

So try to master playing at least 2 (ideally 3) of your current team’s setup characters in order to always be able to play as a character you can play well.

Don’t invest money in all characters
The coins that you earn in the game might seem enough early on, but really soon you will be proven otherwise. And since you will only be using 5 characters of them all during fights, don’t rush to invest the coins in upgrading all heroes: you won’t afford it in the long run.

Instead, be patient a bit, wait to learn which are the best (and have more unlocked) and only afterwards decide which ones should be upgraded and which ignored. 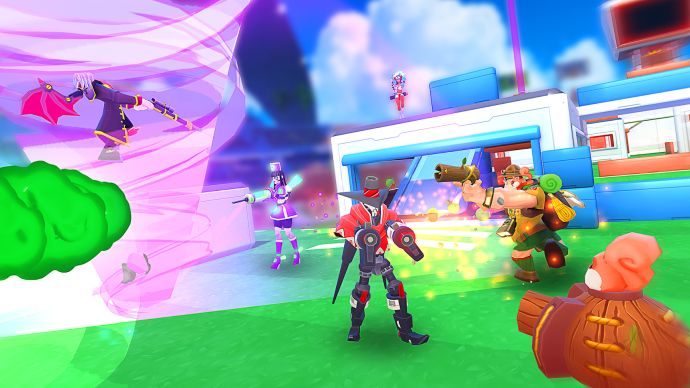 Always work on opening a chest
I was saying earlier that the chests will be your main way of getting new characters or cards for upgrading existing ones in FRAG Pro Shooter. Therefore, you should always be working on unlocking these chests.

Unlock the ones that are ready faster during the day and leave the ones that need more hours to be unlocked over the night. This way, you optimize your chest unlock rates and get the most out of your time.

Join an active, solid club
Being part of an active club is extremely important because you can ask fellow club mates to give you cards for a specific character that you want to level up. The more active your club is, and the better the level of its members, the better it will be for you.

Keep an eye on the store
In the shop, you will always have some daily cards that are available for purchase. The common cards are cheap, but the problem is that these characters are usually not that good, while the others are expensive.

However, if there’s a card available for one of your favorite characters, it might be worth getting – so keep an eye on the store, but don’t rush to spend your money on the cards there as the regular coins are pretty difficult to hoard.

Complete the daily missions
Completing missions is extremely important, not because of the rewards offered for doing so (which are relatively low, actually) but for the chests that you unlock from doing so.

Keep an eye on those missions and keep fragging enemy characters in order to open even more chests and improve your starting players even more!

Offense is the best defense imho
With all things in mind, I would say that FRAG is an extremely fast paced, action oriented game. Offense here is the best defense and I would go as far as saying that, unless if you’re dealing with a massive attack (all opposing team members) of your base, you should simply ignore them, let your teammates defend and go all in to attack the enemy base.

This will rarely happen and you will usually be able to do it together with your teammates, which makes it even more fun. But do focus on the offense instead of waiting inside your base to take out incoming attackers: this is not how you win the battles!

– Learn to look at the minimap. Located in the upper left corner, it will offer some important information regarding the placement of the players and the hot areas on the map (as well as areas that are not defended).

– Try to shoot at move. Don’t stop when you start shooting, unless you are out of range (with a camper). In all other occasions, move while shooting and you’ll be able to avoid the incoming fire of most bot players.

– Don’t forget to use your character’s special power. Do it at the right moment, not when the power is available in order to maximize the gains!

These would be our tips and tricks for fellow Frag players. If there’s something that we haven’t covered yet and you managed to uncover, let us know by commenting below. 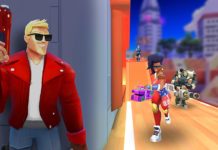 FRAG Pro Shooter: How to Unlock All Characters in the Game