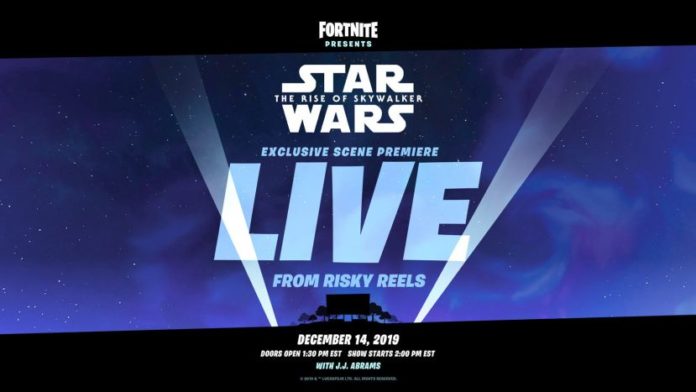 Fortnite is among the most popular video games released in recent times, and companies have been using the game to promote their products, even if they have little to do with video games in general.

This time, however, fans of the battle royale game developed by Epic Games will be able to enjoy something that is strongly related to video games in a new live event.

It has been announced yesterday that a new Fortnite live event will be taking place on December 14th at 10:30 AM PT / 1:30 PM ET / 6:30 PM UTC / 7:30 PM CET. During the event, which will take place in the Risky Reels drive-in theater, players will be able to catch an exclusive glimpse at a new scene from the upcoming Star Wars: Rise of Skywalker movie. Director J.J. Abrams will also make an appearance during the event.

While this is definitely unique, this isn’t the first time it has happened in Fortnite. Some time ago, an exclusive clip from Wreck-It Ralph has also been shown in the same location, but on the old island. Cross-promotion for Avengers: Endgame also happened a few months back, so it’s not like Disney hasn’t taken advantage of Fortnite’s popularity to promote its latest movies.

Fortnite is now available on Nintendo Switch as well as on PC, PlayStation 4, Xbox One, iOS, and Android. The event will be available on all formats, so you will be able to enjoy the exclusive premiere regardless of your platform of choice.