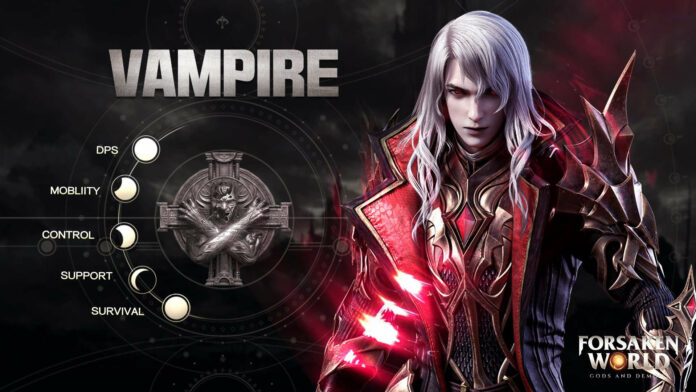 Forsaken World Gods and Demons is an extremely solid MMORPG that does not try to reinvent the wheel, but can still provide hours upon hours of fun, with lots of adventures to be had and even PvP.

Like any MMORPG worthy of its name, Forsaken World Gods and Demons features different classes that determine your character’s abilities. There are a total of seven different classes in the game, and each one is geared toward a certain playstyle. But, is there a class that is above all the others? Let us find out.

The Forsaken World Gods and Demons seven classes are Warrior, Mage, Priest, Rogue, Vampire, Ranger and Gunner. All of these classes are extremely viable, and become even better once you can change classes. Each class has two advanced variants that focus on one of the aspects that makes the class unique.

So, is there a best class to pick to dominate evergthing? Not quite: it all depends on your playstyle. Once you have decided who you want to be in the game, you will find it ease to pick a class and become one of the best players around.

The Warrior class is as straightforward as it can get. Coming with high defense and solid offense, with the Warrior you will be able to cut a bloody path through your enemies with ease. Class changes options include the Paladin and the Hexblade. The Paladin is basically an improved version of the Warrior, featuring incredibly high defense and a decent offense. The Hexblade, however, trades high defense for improved offense and some supporting skills, making the class incredibly versatile and somewhat more interesting.

The Mage class is just as straightforward as the Warrior, but slightly more versatile, as it comes with a wide range of skills that can decimate groups of enemies or take them down by slowly chipping away their health. The Elementalist turns the Mage’s destructive power up to eleven, providing more powerful spells that can destroy single targets with ease. The Arcanist, on the other hand, is a little less destructive, but way better at crowd control.

Priests in Forsaken World Gods and Demons are all about healing, but they can also handle combat quite well, as they can take a beating by healing their wounds constantly. This class’ offensive capabilities are only made better by the Oracle class change, which grants players more offensive options. The Celestial, on the other hand, focuses more on the healing capabilities of the base class, making one an extremely important asset of any party.

The Rogue is definitely among the weakest classes in terms of damage and survivability at the beginning of the game, but his enhanced mobility can make him deadly in the right hands. The available class changes, the Assassin and the Shadow, improve mobility and offensive abilities respectively, allowing any Rogue to specialize in a particular field.

The Vampire is definitely among the most interesting classes in Forsaken World Gods and Demons. This character can hold his own in close combat but also take down enemies from afar with his powerful spells. He is pretty good at both, and only becomes better when turning into a Flamebringer, a class that makes him a melee powerhouse with powerful sword attacks and support skills, or into a Shadowcrafter, a class with amazing resilience that can sustain a lot of damage while dealing a good amount himself.

The Ranger, in his base form, is not particularly interesting, focusing on ranged damage. While he definitely is a good asset in any party, things become quite different when changing classes: the Sharpshooter enhances his ranged damage abilities, while the Jungle Archer makes him a solo powerhouse who can deal damage from afar and even summon creatures to keep the enemy occupied while he positions himself for the perfect shot.

The Gunner’s playstyle is not that different from that of the Rogue, the main difference being way less survivability but considerably better damage. The Gunner becomes even more of a glass cannon when changing into the Gunslinger, a class that increases damage but decreases survivability even further. The Artificer, on the other hand, is a support-focused class that works great in any party, but has a very hard time soloing.