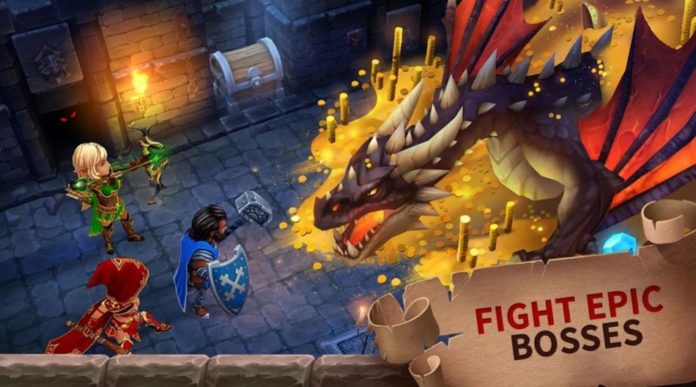 In today’s article we are going to cover all of the Forge of Glory tips and cheats and tell you everything that you need to know in order to win all of your battles!

If you like match three games, but are also a fan of games where you get to build your own base and summon various heroes to help you in your missions, then you will definitely have a blast playing Forge of Glory, as there are just so many things that you can do!

So if you want to learn everything there is to know about the game, let’s not waste another second and dive right into the Forge of Glory tips and tricks right here below!

Start with a powerful hero!

At the very start of the game you will rescue a Lord from a bunch of monsters, and that will end up being your very first powerful hero! You will be able to choose their gender, class and skill, so if you want to know which one to go for, then let me tell you a little bit about each choice!

– they use orange stones when attacking

– they use green stones when attacking

– they use blue stones when attacking

– they use red stones when attacking

– Abilities: Lightning (hit a guard for 2092 damage), Healing Light (heals heroes for 406 HP), Bonus Maker (makes a “Healing” bonus on the field), Mark (increase damage dealt to a target by 10%)

When you take a look at all of their stats, you can tell that the Mage with the Lightning skill will do the most damage. That is the one that I suggest you go for, because in my opinion it is the best (and the Bonus Maker is also super useful because of the “Healing”).

Overall that is the one I suggest you go for: Mage. Otherwise, the Archer I think would do pretty decent to, and the “Bow” Bonus Maker is fine.

In game you will see in the bottom side of the screen a new quest that will appear whenever you finish the old one. These tasks are good to complete because they will guide you through the game and help you progress much easier.

I suggest that every time you are unsure of what to do next, you take a look at the next task to see where it sends you. You can also just start by completing the missions one by one, or by completing the battles on the map and just continuing on your own path, since all battles basically lead to you completing the Map stages.

Learn how to battle properly

In the Map stages, you will have to match at least 3 stones to perform an attack. The color of the stones you match will apply to the hero that you have of that color, so it’s better if you try to match as many of the stones as you can, but with the color of your strongest heroes.

You can always tap the “Auto” button if you are in a rush or if you are uncertain of how to deal with the current setup, but I definitely suggest that you do it manually at start so that you can get used to how it works and better know what to expect in terms of damage.

– Try to make combos as long as possible – they will deal increased damage.

– Try to include the bonuses in your combos, they might prove super worth it – again, match them with your damage dealer’s color, because otherwise it might not be such a powerful combo.

– Do not go for the Healing Potions unless you are really in need of some HP boost (for example in the very powerful Boss fights or difficult stages), else it’s just a waste of moves and stones.

– If you are just getting started, fight manually for a couple of rounds so you can understand what I am saying, but then switch to Auto mode to learn even more.

– Use the Auto mode on to learn what the AI is going for in terms of combos, and when you fight manually try to follow what it does if you are still clueless.

You can unlock more heroes by heading on to the Soul Stones menu, or by tapping on the big blue portal on the map – Hall of Souls. There you can place the Rare Soulstones in the empty slots and open them in order to receive heroes or guards.

The chances are pretty random, so it is all up to RNG to give you something! However, there are a few twists and turns to this, so here is what I suggest that you do in order to maximize your rewards that you can obtain!

– As soon as you collect Rare Soulstones, save them up! Do not use them just yet, until you gathered 9 of them.

– When you have 9 Rare Soulstones, then you can place all of them in one of the slots in the Hall of Souls.

– When you place 9 Rare Soulstones you will unlock an Ancient Secret, which is super rare to obtain, therefore it requires a lot of work! The Ancient Secret can be unlocked once you gathered enough hints, which you will receive by opening 9 Soulstones at once.

– An extra trick here to get more chances of obtaining the Ancient Secret and hints is to upgrade your Rare Soulstones to Epic Soulstones.

– This will give you an extra higher chance to unlock the secret, so it’s better do spend the Soul Shards to upgrade 1-2 Rare Soulstones to Epic beforehand.

– After you have 1-2 Epic Soulstones, out of the 9 Soulstones slots that you have there, place 7-8 of them Rare and 1-2 Epic. This will work better in my opinion.

How to upgrade Soulstones?

Tap on that and it will open the Soulstone Upgrade menu. There you will need to have quite a lot of Soul Shards, and even more luck! The upgrade will have to go through several different steps, which all depend on luck.

Firstly, you will start by upgrading it three times. Then two more times, and at the third one you will receive an extra reward. This will go on, until the fourth bar which will give you as final reward an Epic Soulstone.

Basically the mark that you will see on the progress bar down on the bottom side is the one that you have to pass in order to succeed the upgrade!

This mark will go down the more you fail, to help you with your odds of passing it. So even if you fail one after the other you will still have a solid chance to passing it sooner or later because it will keep decreasing.

I suggest that first and foremost you should start by upgrading your Obsidian Mine. This will provide all the materials you need for making upgrades pretty much, so it is definitely something that you want to keep at maximum possible level all the time.

Start by making the Obsidian Mine level higher, I would recommend going for level 10, but it is entirely up to you. I personally used Gems to level it up, as the upgrades cost 1-3 gems per try at this stage.

Once you made a few upgrades to the Obsidian Mine, you can move on to the Heroes Sanctuary and upgrade that to level 7 at start, then save Obsidian for further upgrades here.

Once you are done leveling the Heroes Sanctuary (or you reached a level that you are happy with), you can start working on the Gold Mine. These resource buildings are super important to be upgraded, because they will affect your overall gameplay, so it is good to make these upgrades first before you move on to the Castle and upgrade that one.

The Castle will require a ton of resources, and by upgrading these resource buildings first, you pretty much ensure that you have enough resources always.

When you are placing your Guardians, you should have these things into consideration always:

– Is this guardian better than the other one? For example, the Guards that are single units will be more powerful than the ones that come in packs, because they have basically all of the power that the ones which come in packs combined into a single unit.

They also will die much harder, and that is something you should take into consideration when you pick them.

– You can select the Autogroup option to let the game pick the Guards for you.

– You can upgrade your Guards. Tap on the Upgrade button and start making the powerful ones even more powerful!

– Always pick the Guards which have the best stats overall, and also the best Seals (a good Seal would be the one which gives Armor). However, you shouldn’t pick solely based on the Seal, because that will get you nowhere. The Guard’s power should come first, then the Seal power.

Fight in the powerful Caves

There are sometimes certain caves which will have a red-ish glow and a Gem on top of the entrance. Make sure you assemble your strongest heroes and always try to fight in these, because the rewards are much better than from the normal dungeons.

For example you will encounter 6 stages instead of 3, so it might lead to you dying even! if that happens, don’t worry! Watch an ad to resurrect for free or use a revive potion! These caves will give very good rewards, so make sure you try to do them whenever you have the chance!

You should always take your time and look for an active guild, because that will open up a whole new world to you!

By joining an active guild you will gain access to guild quests, which are very rewarding, but also reward you with one Epic Soulstone! If that is not a good enough reason to join, I don’t know what is!

Lay Siege to everyone (but the strong players)

This might not be the most exciting looking tip out here on our list, but it is definitely something you should consider.

Basically when you set up your Guards and Heroes you will have certain ones that you are using – well, so does everyone, but the thing is that the stronger players will have better Guards and Heroes, so it’s better not to face them (for ow at least).

Simply head on to the Siege menu, and there you can spend 5 Gold to look for a new player that you can match versus. You will see that the outcome may be one of the following “easy”, “normal” and “hard”.

Never try to fight in the “hard” battles because you can already guess the outcome. Try fighting the “easy” ones, because they will still reward you with goods and the battles are winnable super easy.

These would be all of our Forge of Glory tips and tricks that we have for you right now! Do you know some more useful tips and battle strategies that you want to share with the other players? Leave them down in the comments section below!