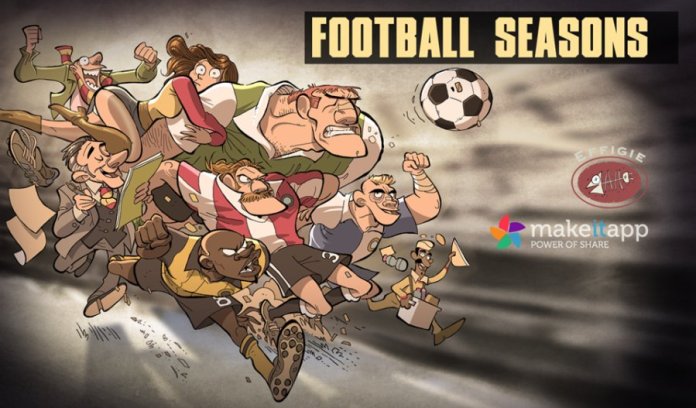 Football Seasons is not the first attempt at creating a collectible card trading game that gets mixed in with football management, but it certainly is one of the better attempts. Even though it throws out of the window all the depth and realism that fans of the Football Manager franchise love, Football Seasons is all about the fun, the quick and quirky gameplay and the nicely drawn cards.

You start the game – or the season, because each game last nor more and no less than one season – with seven cards in your deck, you upgrade them as you see fit and you slowly build up your deck, trying to use the cards that you have at your disposal to win as many games as possible.

The game itself is pretty basic: for the direct matches, all the cards use just one “power” rating and the player who manages to come up with the biggest number wins the match. Some cards have some extra “abilities” like giving you some dollars and/or fame, while some cards let you draw an extra one from your deck after playing it. Dollars are used to buy extra cards every month and fame is used to decide the winner at the end of the season. It’s a pretty simple mechanic that might sound a bit complicated when you talk about it, but in game things make sense and are pretty easy to follow. 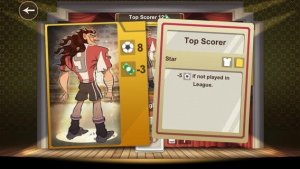 You have a set number of matches to play each month (the regular season, cup match, Champions match and Big match against one of your 4 main competitors which can be either AI controlled or human players in asynchronous multiplayer) and the challenge comes from dividing your most likely limited deck into all categories, trying to win all the games. You will sometimes be faced with a tough choice: like ignoring the league, for example, and going for the Champions games instead or deciding to lose a cup game in order to stay at the top of the table. Decisions, decisions… and it won’t always be easy!

So even though in theory it’s all nice and perfect with Football Seasons, there’s one thing that kind of draws it back a little: in app purchases. The game is built in such a way that it’s very difficult to have a decent experience without spending some real money or without spamming your friends with requests and invites. As I said, every month during the season you can purchase new cards for your deck. There are a gazillion cards available, but most of them must be unlocked first otherwise you can’t get them. Unlocking is done with the game’s premium currency, and that’s when the “you have to pump money” comes into play.

The prices for unlocking the cards are pretty high and you do have to unlock a big number to have some options when you play and this kind of ruins it. Not to mention the fact that there are more “leagues” in which you can play, each with its own price to be unlocked and each with new cards to spend your money on. 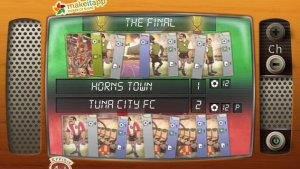 However, if you are dedicated and a bit lucky, though, you can still get some success in Football Seasons with the basic deck, win a season and unlock some cards since the premium currency rewards are pretty big for being the champion. So I guess that’s how it always goes with in app purchases: you either pay to get on top quickly or you go the long walk way, but eventually get it done.

Visually, the game looks really great. The drawings on the card are fun and nice and the overall cartoonish/comic book appearance of the game is extremely appealing. The game itself is very fun and provides us with great value and a high level of challenge – just go out there and win trophies! The more you do it, the easier it will get!