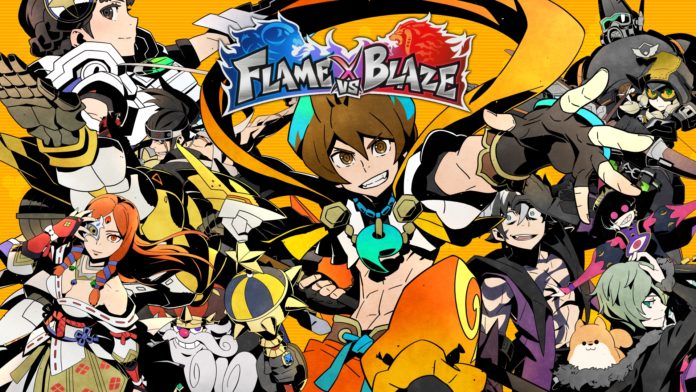 Square Enix brings us Flame Versus Blaze, a fast-paced 3-on-3 MOBA for mobile platforms. Bearing Square Enix’s trademark visual charm and style, the game is fresh take on the MOBA genre. Players battle it out to power their Reactors, giant creatures with undeniable strength. Our Flame Versus Blaze cheats and tips will help you adapt to the battlefield!

While Flame Versus Blaze has a lot of familiar aspects that MOBA players will recognize, there are some new ideas here and there, so our Flame Versus Blaze cheats, tips and tricks strategy guide will give you a primer on what to expect!

Most of your cards are not activated right away. The first card slot activates at level 1, which is the start of the round. The second and third slots activate at level 4 and level 7 respectively. This means that you have control over how your character builds over the course of the game, and you should always be changing your deck to reflect your current character choice. Want to feel a little more sturdy at the beginning? Try equipping an HP boosting card as your level 1 card. Want some more attack power towards the end of a match? Try equipping a power boosting card as your level 7 card. You can create up to three preset decks so you can switch between them easily.

Keep in mind that certain cards also have “trigger” conditions that must be met to unlock the card’s full potential. For example the “Monster Slayer” spear has a boost that is trigger locked, and the trigger requirements is to reach level 3. Upon reaching level 3 the spear will make you do 20 more damage to monsters, making it an excellent tool for recruiting monsters.

Focus on your agent’s strengths!

As a general rule it’s usually better to focus on improving one aspect of your favorite agent when putting a deck together. Let’s take our main pal Yasaka as an example; he excels at rushing into battle and disrupting enemies thanks to his high mobility and defense increasing skills. You’ll probably want to pair HP boosting and defense oriented cards early on so that he becomes a real wall to the enemy.

Utilize Mode Shift to adapt to the battle!

You’ll need to master both modes of your agent to fully realize their potential. An agent’s alternate mode grants them different stats, a different second and ultimate ability. Modes are designed to be used to respond to changes in the battlefield, but remember that you have to be back at base before you can mode shift.

One trick to remember is that ultimate abilities, as you know, have long cooldown times. The ultimate for your alternate mode actually runs off a separate cooldown, so if you use an ultimate in one mode, the other mode’s ultimate should be ready for use. You may want to mode shift earlier than intended based on this trick alone!

Focus on the Reactor!

Taking out agents on the enemy team is great but shouldn’t be your main focus. Instead, you should try to gather as much mana as you can for your reactor. Remember that taking care of your reactor is the main objective and it’ll make the final push at the end easier! Try to wander around the “jungle” area of the map at the start of a match – that’s the lower region. This is where all the monsters are, and you should try to take control of as many as you can. Controlling a legion of monsters will help you assault not only the enemy team, but their manapods as well.

Each reactor has two manapods lined up in front of it. Destroying the enemy’s manapods will severely hinder their strength during the final struggle at the end, but this goes for yours as well! Lead an army of monsters to take down the enemy manapods but keep a close eye on yours.

Use the correct mode for the job!

In addition to mode shift changing your abilities and stats, your agent will also gain somewhat hidden stat boosts. The game doesn’t really go into detail about the different modes, so we’ll cover them here.

In addition to the tip above about mode shifting, knowing the different modes is key to victory!

That’s all for Flame Versus Blaze. If you have any other tips or tricks to share, let us know in the comments below!