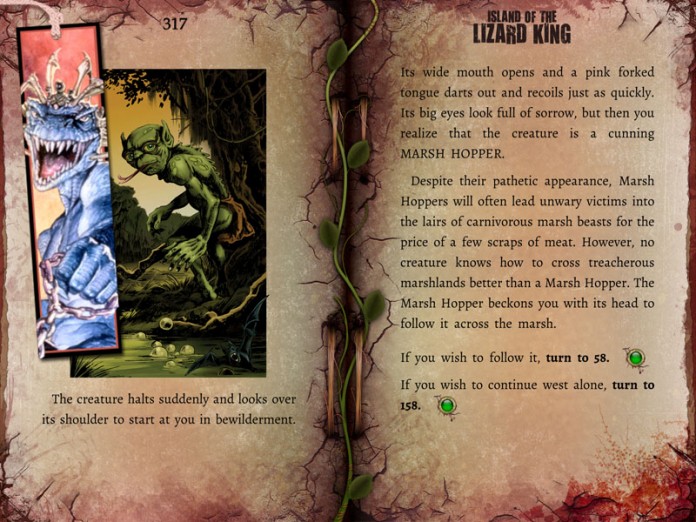 The fourth game of the series developed by Tin Man Games tells the story of a group of young men kidnapped by the terrible Lizardmen of Fire Island. As expected from creatures as vicious as these ones, our heroes will find themselves facing a grim future of slavery, starvation and lingering deaths.

Apparently the Lizardmen are controlled by an even more vicious Lizard King, who is described as being mad and dangerous, who keeps the Lizardmen in check with the use of sorcery. Not that I would expect them to be any different, even without a mind control spell in place.

Just like in other Fighting Fantasy, the game features an impressive presentation with animated page turning, autmated adventure sheets, physics based dice and more.

Ian Livingston, creator of the franchise, praised Tin Man Games for the high quality of the new game:

“It’s been a pleasure to work with Tin Man Games on this project. They have succeeded brilliantly in capturing the essence of Fighting Fantasy, re-imagining Island of the Lizard King for digital audiences. The new features are great, auto-mapping in particular, and readers will need all the help they can get to deal with the Gongchong and Lizard Men who are looking forward to welcoming hapless victims to their island.”

Fighting Fantasy: Island of the Lizard King is now available for purchase on the App Store.