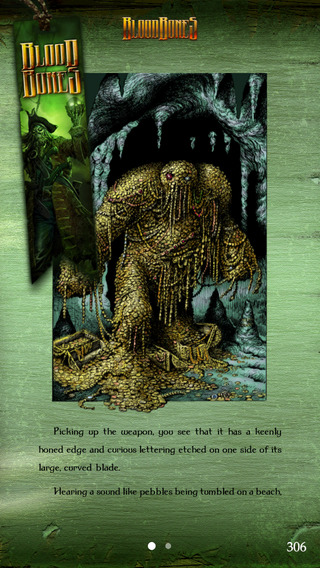 Fighting Fantasy: Bloodbones is the latest entry of the Fighting Fantasy series developed by Tin Man Games’. The series is well loved by many gamers all over the world thanks to its engaging storylines and role playing game mechanics.

Being part of the gamebook genre, Fighting Fantasy: Bloodbones doesn’t play all that differently from its predecessors and other similar games.  Some interesting new gameplay twists, however,  not only make the game stand out from the rest of the series but also make it an even more engaging experience.

In Fighting Fantasy: Bloodbones, players will be traveling across the high seas in search of the pirate lord Cinnabar, who has killed the main character’s parents before the events of the game. This evil man has terrorized the world in life and even death cannot stop him, as he has been brought back to life through a voodoo ritual. While the backdrop for the whole game is fascinating, I feel like Fighting Fantasy: Bloodbones’ storyline doesn’t live up to its full potential: it’s still a nice enough story but it’s not as engaging as in previous games.

What Fighting Fantasy: Bloodbones lacks in the story, it makes up for some of the new gameplay mechanics, which make the overall experience quite enjoyable. The first new mechanic is the ability to spend gold to purchase a variety of items and to gamble. The game offers plenty of chances to do both, expanding the gameplay experience considerably. Earning huge amounts of gold isn’t needed to complete the game though, as Fighting Fantasy: Bloodbones features plenty of choices that allow players to avoid fights entirely, but the extra possibilities are a welcome addition that further expand the formula of the series . The new time mechanic is another new gameplay feature which adds more weight to the choices players will have to make in the game, forcing them to make the right ones if they want their journey to be successful, as each passing hours affects the game in a few different ways.

Just like the previous entries of the series, Fighting Fantasy: Bloodbones features a top-notch presentation, with plenty of beautiful illustrations that truly bring the whole story to life. Even though players may not care all that much about the game’s story, there’s really no way they will be left unimpressed by the stunning artwork found in the game.