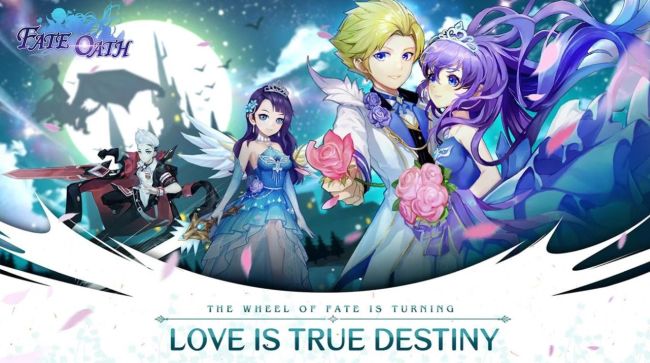 In today’s article we are going to dive into the Fate Oath tips and cheats to help you get stronger fast and to complete all of the quests and dungeons that the game has to offer quickly!

This is a game where you get to fight while you are doing your day’s work or any other chores, so it can be pretty much played while idle. You will just have to make sure to check back from time to time to make upgrades and collect loot, as well as gear up your hero – so make time in your day for that!

But thus being said, let’s not waste another moment and dive right into the Fate Oath tips and tricks right here below and teach you everything that you need to know about the game!

In the top left side of the screen you will have your list of quests, which will quickly start piling up! The ones that you should mainly focus on are the Main quests (which have the “Main” text in front), because those are really going to get you through the early game extremely fast, by granting you tons of EXP and unlocking game features.

Basically what I recommend that you do as soon as you start the game, is focus on completing the Main quests as they come, and when you cannot progress any further because of the level requirements you go on ahead and do the Side quests.

The side quests will have various requirements, such as completing a certain dungeon or enhancing some equipment, but the rewards you get from them are all going to be super useful because everything matters in this game!

The daily quests are tasks which you can complete on a daily basis and you can claim tons of EXP and other loot, which will help you get stronger. I recommend that you do all of the daily quests every single day, because the more you level up, the tougher it will be to gain EXP fast.

By doing your dailies you’ll be able to claim extra EXP as well as Gold and other useful loot, so it’s going to help you get stronger. Make sure that you complete your daily missions before they reset every day, because you will have to start over from the beginning if they reset!

Some of the daily quests that you have can be seen on the left side of the screen, underneath the quests tagged with Main or Sub. So try to complete these before their time runs out.

Do the dungeons daily

Along with quests, you will also have a daily limit for (some) dungeons. Some of the best dungeons in the game are the ones which give you EXP and other useful items for improving your hero, so make sure that you do them within the daily limit.

Do not ignore the EXP dungeon because that’s where a lot of your EXP later on in the game will come from. You should also try to do the dungeons which give you CP improvement items (for your mount, wings and so on) because you’ll thank yourself later for completing them as often as you did.

As a f2p player you will want to really take every opportunity to upgrade your character, because otherwise it will take longer than it takes for the premium players.

Get equipment from the world boss

There is a limit to how many world bosses you can fight, so if you are just at the beginning you can focus all of your attention to the first one, but if you are closer to a higher level boss, then save your tries for when you have leveled up so that you can challenge the stronger ones.

Make sure that you always equip the best gear

Another important thing I want to discuss with you is that you should make sure that you always have the best equipment on – no matter if it’s red, orange or purple. You can check out your Bag and if you see there an item which has a green arrow on it, tap on it and select Equip.

That way you will always have on the best gear possible – sometimes the game won’t automatically equip that for you, and so you will have to do that by hand. Just make sure that you check out the Bag before you smelt anything.

As you keep on fighting those world bosses, you will pick up a lot of equipment pieces. Since you will be able to get a lot of new pieces, some of the ones that you pick up will not really be useful anymore – so I suggest that you smelt the old gear because that will give you some CP in return, as you level up the Smelting.

If you want to smelt your gear, tap on the Bag-> Smelt and there you can place all of the equipment that you will not use, because that is the best thing you can do with it. Of course, you can also choose to sell it if you’re in need of Gold, but in my opinion it’s better worth it to smelt it than to sell it!

For further upgrades, take a look at the Power Up button

You might not always notice that there’s an upgrade available, and for that, the game created the Power Up button to remind you of it. You can find it next to your skills, and whenever it pops up on the screen tap on it and make the available upgrades!

It will quickly show you all the possible upgrades that you can make (just tap on them) or show you that there are some rewards that you can collect, such as daily login rewards! At the beginning of the game you will have to check out this option every couple of minutes because upgrades are pretty easy – but later on they won’t come as easy, so you will not see this button as often.

Enhance your gear to the max

If you want to further get a lot of CP, you can head on to the Menu -> Forge and there you can spend Gold to enhance each individual piece of equipment you are wearing. It will cost increasingly more, the higher enhance level you go, so I really suggest that whenever you have some extra Gold you spend it here, until your equipment is maxed out.

Claim tons of bonuses and boost your CP

There are a few other ways to increase your CP in game, by completing various daily tasks and in game events. There will be a button in the upper side of the screen called “Benefit” – tap on it and you will see a list of bonuses that you can claim.

Just try to check them out and log in daily to the game to claim the daily sign in rewards, because they will give you a ton of Bound Diamonds that you can then spend in the game, as well as other useful loot.

Every now and then there will be some in game events that will give you limited rewards, such as Bound Diamonds and improvement items. You can see the time limit underneath them in the upper side of the screen, and you should try to complete as many as you can before they run out.

These events will be available from time to time, and there are others that you can complete only for a limited time after creating an account – so check them out and finish as many as you can within the given time!

These would be all of our Fate Oath tips and tricks that we have for you right now. Do you know some more useful game tips and tricks or want to share some more strategies with the other players? Feel free to leave them all down in the comments section below to be shared with everybody!