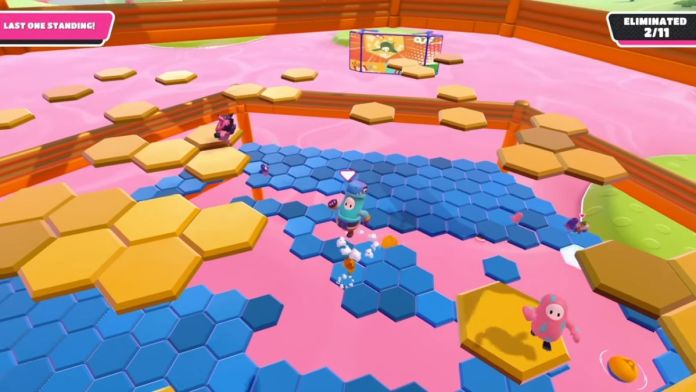 The popular wacky battle royale Fall Guys is not quite on mobile yet… but that has not stopped other developers from jumping in on the fun! Enter Fall Guys: Knockout Ultimate, a game that is heavily inspired by the actual Fall Guys: Ultimate Knockout.

As a fall guy, you will run across the rooftops of a horzion of skyscrapers trying to reach the finish line before anyone else. You will have to jump, slide, wall run, climb, and more to get to the end of the course!

Use Slow Swipes To Move Carefully

In Fall Guys: Knockout Ultimate, your fall guy runs forward on his own – you do not need to tap anything to make him run. The only thing you are in charge of is steering, which is done by sliding your finger across the bottom of the screen.

You might think that you need to do big swipes to make your guy move fast enough, but in actuality you really only need to move your finger slightly. The sensitivity is pretty high in this game, so you might make your fall guy run off course if you move too much.

Use gentle movements as you slide across the screen and fine-tune your steering as needed. You almost never need to react within a split second, so small movements are always best for keeping your fall guy on the track.

Go For The Boosts

At the start of the race, everyone is on foot. You may notice that everyone is running in exact the same position, and that is because everyone has the same speed on the ground.

The trick is to start getting busy! Any time you perform an acrobatic action, like sliding or jumping, your speed increases a little bit. Specifically, try to look out for the points that have the yellow arrow pads on them.

These indicate that when you run through them, you will speed up a bit. Make sure that you are constantly scanning the horizon to see if there are any boosts coming up. The most straightforward path is usually not the fastest!

Zig-zag and go to the left and right to search for alternate paths. Remember: you do not want to just to be running on foot the whole time. Gain speed by sliding under obstacles, wall running, and jumping off ramps!

If your fall guy runs into a wall, they will automatically start climbing it until they get to the top. This is helpful if you mess up a jump, but be careful not to let it happen to much.

Climbing is very slow, so you will lose a lot of speed when you are trying to recover. It is best to avoid situations where you will fall into a wall to keep up your momentum.

A common obstacle you will see pop up a lot are chain-link fences. These fences can be scaled and climbed like a normal wall, but more often than it is much faster to simply jump off the current platform and maneuver around it.

Wall running is a great way to cover a lot of ground, as the fastest routes are usually traversed by wall running. These routes are also the most dangerous, so be prepared!

Here is a little trick we learned while wall running. When you start to lose momentum, your fall guy will start to descend down the wall, so it is best to jump to the other side. But what if you do not have a wall opposite of you?

Well, if you jump off and then immediately move back onto your wall, you will gain some height without needing a second wall. You can do this maneuver as much as you want, and it is a great way to build up speed and height using only one wall.

What Is The Deal With Coins?

Every time you win a race, you are awarded with some shiny coins… although, there does not really seem to be any place you can spend them at.

We are going to assume that there is going to be some future update where you can spend the coins, because as of writing this guide there is nowhere to use them. A future update might allow you to upgrade your fall guy or something, but for right now you can safely ignore them.

Watch The Opponents Ahead Of You

If you are having trouble on a particular level, try to trail the person who is in the lead. The AI-controlled opponents sometimes do not change, so the person who won last time will win again a second time, and you can use this to your advantage.

You can see exactly what route they take and what obstacles they run through, so you can get an idea of the fastest route on the course.

Yes, that is right – this game is like the other simple .io games where the game wants you to think that you are going up against real human opponents, but they are actually computer controlled AI opponents.

Because of this, the game actually allows them to sort of cheat. Once you get to the later levels, you will start to notice that some of your opponents start way ahead of you. There is no way around this other than to play skillfully and pull ahead of the group.

But, again, this allows you to use them to your advantage. Watch them carefully and follow their route, as they usually take the fastest one. Do not be afraid to break off and start going a more optimal way too – remember that the skyscrapers are yours, so make the most out of your parkour skills!

The levels in Fall Guys are not randomly generated – each level is fixed, which means that it will not change even if you fail the level.

You can only move onto the next level if you finish the race in first place. Do not sweat it if you mess up on your first try! You can simply try again and probably do better this time since you sort of know the level layout now.

Practice makes perfect, and it will not be that long before you are a parkour expert, running through the skyscrapers at breakneck speed! Do not give up and keep going!

That’s all for Fall Guys: Knockout Ultimate! If you have any other tips or tricks to share, let us know in the comments below!