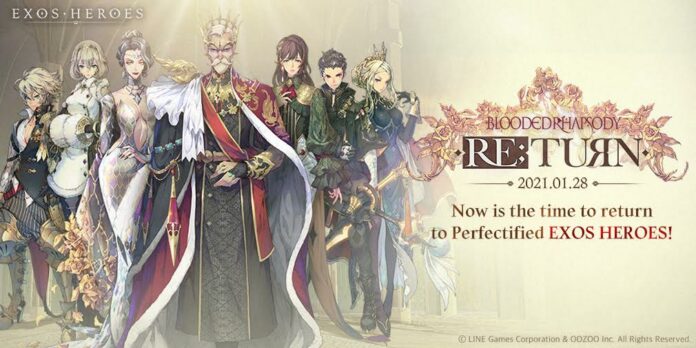 The plot thickens with the theft of the empire’s legendary sword as Exos Heroes prepares to launch its third season, “Blooded Rhapsody”, on January 28.

Discover more conspiracies and follow Zeon and Iris’ tale with the introduction of a new Nation called “Saint West” – and to make things even more interesting, LINE Games is taking things up a notch with three new characters from the Royal Family, namely, King
John Donk, Queen Carrie, and Prince Nemeris.

Players can expect the same stunning artwork and exhilarating gameplay as the maximum account level cap will be increased from 60 to 65. Whether you’re all about collecting heroes or you’re a narrative-driven gamer eager to follow the story of the stolen Exestruk, the January Special Event will reward you with a nifty login bonus from January 18 to January 27. All you have to do is login and you can score 200,000 Gold, 300 Sunstones, 200 Xes, 5 Nation Recruit Tickets, 10 Dye Coupons, and so much more.

From quests and mini-games to scavenging the Core Raid for Raid Coupons, all players get to enjoy 3,000 Xes, 1,000,000 Gold, 30 Nation Recruit Tickets, 100 Dye Coupons, and a Gold Fatecore of their choice to celebrate the launch of the Season 3 update.
Blooded Rhapsody isn’t the only content update players can look forward to though. Starting today, players can take part in a new 2 week-long idol theme Core Raid event as well as collect the second Fatecore from the idol series, Millennial Star.

This new collectible hero, known as April, is the leader of the idol trio Fatecore series, who charms her foes and bedazzles the world with her exclusive Particle Star. To guarantee that April gets added to your collection, you’ll want to make use of the Fatecore.

Chance Increase before January 21. Check out the Exos Heroes official Facebook page for more updates on the third season!