Nexon M is no stranger to making awesome games, as they’re the developers of big hits like Oz: Broken Kingdom and DomiNations. Their latest project is Evil Factory, a retro-inspired arcade game that’s brimming with classic charm. Does Evil Factory live up to company’s good name?

Some time ago, super powers of the world created the International Alliance to fight back against the evil organization “Kraken”. The International Alliance was ultimately successful and Kraken was driven to extinction… or so it seemed. Fast forward to the present, and a recently discovered secret laboratory in the Antarctic is revealing something sinister. Fearing the worst, the Alliance has sent a lone soldier to investigate. Enter Leo, a short but proud super soldier with more than enough skills to back up his legendary reputation.

Evil Factory is definitely a unique game to say the least. If I were to describe it, I’d call it an interesting blend of classic tough as nails games like Contra and Metal Slug with a hint of Bomberman added for good measure. Evil Factory is structured like a typical adventure game – you start out on the first level of the Kraken facility and descend to a new floor after you defeat the boss. Fighting the bosses is where Evil Factory’s biggest strength lies. 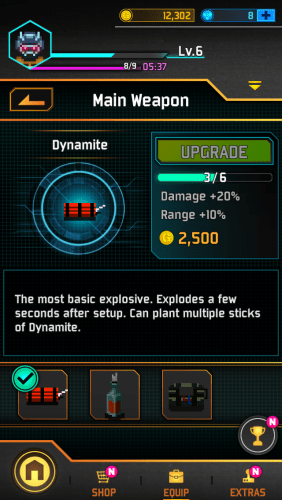 Evil Factory plays out in a top-down fashion. Leo can bring a main weapon and a sub weapon with him into battle. What I thought was very interesting was that Leo’s main weapons consist of “set and forget” type weapons. For example, your first weapon is dynamite which you place down and wait for it to explode. This adds an element of risk and reward, as you’ll need to read your enemies and make sure they don’t just simply walk out of your blast radius. You’ll also have to get close enough to them to set the dynamite in the first place, which is dangerous in itself!

Leo’s sub weapons are a different matter. They have ammo which means you won’t be able to use them forever unlike the main weapons. These weapons are usually a bit safer as they’re mostly ranged weapons like grenade launchers, flamethrowers, and more. They add a bit more strategy to weapon selection, but I’ll say that the fights in Evil Factory are 30% preparation and 70% execution.

What I loved the most about Evil Factory is that there is never “filler” content. Each floor has a unique new enemy or boss to challenge, so the fun and excitement is nonstop. And what an exciting game this is, as you’ll be darting left and right frantically to dodge attacks. While Leo has an impressive arsenal of weapons, he himself can only take a single hit before he goes down so you have to give it your all!

As mentioned, the boss fights in Evil Factory are absolute spectacles. Evil Factory is sporting a sort of modernized pixel aesthetic, so while it’s oozing with retro goodness it’s also sharp and defined, giving it a very slick appearance. You’ll be fighting a robot penguin, a giant flamethrower man, a massive crab robot and more! The bosses have really fun and interesting designs. They each have their own unique attacks, so expect to dodge all sorts of mayhem. 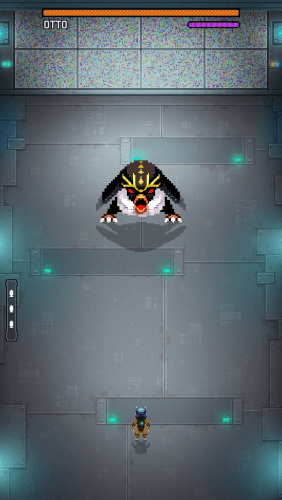 The developers of Evil Factory knew that precision movement isn’t that accurate on mobile devices, so they threw in a mechanic that can really help you out. At any point during combat, letting go of the movement pad will activate Leo’s Time Warp. Time Warp is essentially a slow motion mode where everything comes to a crawl. Did a boss just shoot out a ton of bullets? Activate time warp and plan your route! Time Warp is a really cool mechanic because it creates opportunities for the player to play out these narrow dodges that leave you on the edge of your seat. Time Warp has limited use before it has to recharge so you’ll need to use it wisely.

There’s plenty of replayability and challenge to Evil Factory. In addition to the weapons, Leo will also gain access to new helmets that provide passive bonus effects. In order to get these helmets though you’ll need to complete all four challenges on a floor which aren’t even revealed until you beat the boss at least once. It’s highly recommended that you get as many of these helmets as you can, because a lot of them have useful abilities! 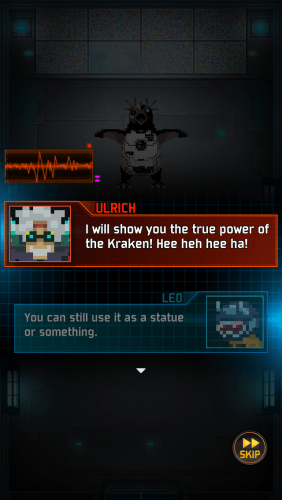 The pay model of Evil Factory is pretty fair as well. The game itself is free to download, and you run on a stamina system. Because of how fast you’ll probably die in the many boss fights, you’ll burn through your stamina pretty fast. You can also revive on the spot using a blue token, the game’s premium currency. Every day you can open a free chest that will have a random amount of goodies in it including the blue tokens.

Evil Factory is a love letter to the ultra challenging games of ages past, and if you’re up for a fun adrenaline rush this is your game. Evil Factory has already been downloaded over 1 million times since its launch, so it’s safe to conclude that Nexon M has done it again!

You can download the game on the App Store and the Google Play Store.