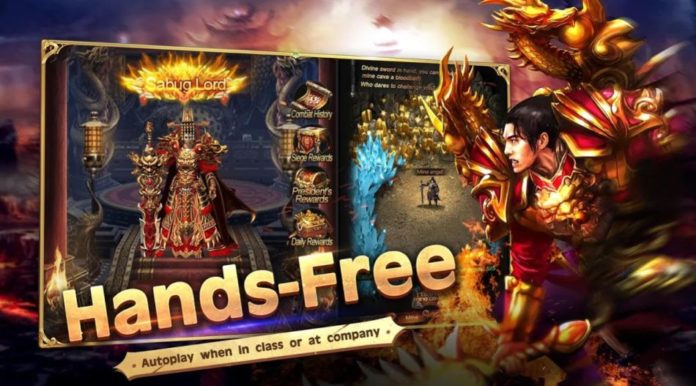 In today’s article we are going to share with you all of our Eternal Legend tips and cheats to help you become a powerful and pass more stages. Eternal Legend doesn’t seem to have some back story or introductions or so, but rather just a ton of fighting.

This makes the game pretty… unusual at start, because it doesn’t have some certain objectives to say so, it doesn’t tell you what to do and where to go, and instead your character just starts fighting. You will receive some quests, but if you aren’t exactly paying attention to what they say and ask of you, you probably won’t really notice anything.

Well, confusion apart, let’s not waste another second and dive right into our Eternal Legend tips and tricks right here below!

Start leveling up and following the quest line

There is somewhat of a “quest line” in Eternal Legend, but it’s not quite detailed and it is pretty simple overall. One thing you need to do early on is just fight until you level up quite a bit and pick up some gears. We will give more details about the gears below, but in the meantime, all you should really focus on is leveling up.

You will auto fight, so there is nothing you can do really. The game moves and attacks automatically, and all you can do is make upgrades and gear up to be more powerful in the long run.

What you should do at start, since you want to level up as fast as possible, is just accept quests and keep on following the same pattern: accept quests, fight, defeat bosses and fight some more.

Gear up all the time

What you should do, however, is always equip the best gear you have at hand. Whenever you see a red dot on your Role tab (Role -> Role) you might see an “Equip All” button which will automatically equip all the gears that have better stats than your current one.

I suggest that you always pay attention to have the best gear equipped at all times and to always be prepared to face stronger enemies – be it enemy monsters or players.

Going idle could actually be good for you

This game is an idle fighter, so you should consider actually going idle in the game to let the character level up on its own. This is something that I have found that worked for me quite a bit to level me up while not in game.

I suggest that if you are a player who still wants to enjoy life, this type of game is the best for you. You basically set up your character’s gears and let the character farm EXP and money while you go about your day!

Just make sure you come back in an hour or two to claim the rewards, change the gear for some better ones that you probably picked up and you’re set for success!

In game there are a few bosses that you can fight in order to obtain better gears in game. These bosses can be found in the right side of the screen, under the “Boss” tab. There, you will have a list of all the available bosses and possible drops that they got, as well as their levels.

Don’t fight alone these bosses because you will most likely not succeed! Instead, what you can do is go fight and once you’re in the Boss’ arena, select to attack the boss (or the party leader). I always prefer to go for the party leader, because I have fun killing other players in game (I know that might be rude, but I like PvP), while also gaining several rewards from the boss!

So no matter what you choose to do – be it attack the party leader or the boss, you’ll still receive rewards! Just do what you like the most!

Another thing you need to keep track of is how many times you can go do the bosses. In the top left corner of the screen you will have a number of tickets which let you go in a few times. I suggest that you always use them all because the rewards are plentiful and the tickets refresh after some time!

The dungeons, are pretty similar to the boss fights, except for the fact that they are solo fights. Here you will have to defeat the bosses yourself without help from other players, so you need to be pretty strong in order to pass all the stages.

Worry not though, with time you will manage to collect all the best gears from bosses and you can still challenge the less powerful dungeon levels until you manage to become so powerful to pass the stronger stages.

This is something that you might not have noticed, and it’s a pretty important one too! In the bottom right corner you will see a small button with “Autoplay” or “Autoplay Activated” (if it’s already on).

If it’s not activated, you can tap on it once and it will start progressing through the stages and bosses on its own, so you won’t have to go complete the levels and boss fights on your own.

What this option basically does, is this: you know how you have to fight the stage boss every now and then by pressing the symbol on the bottom right? Well, by pressing “Autoplay” it will automatically fight them!

A few other Eternal Legend tips and tricks:

— Always upgrade all the skills! This will let you have your strength maxed out at all times and you will never fall behind in terms of power.

— Start Smelting gears before the bag gets filled up! This can be done by opening the “Bag” tab and tapping on “Smelt”. This will smelt (decompose) the gears you have gathered from grinding and you will receive coins in return!

— Check out the Skill tab! There you will have several options: Skills, Qi, Meridian and so on. Always keep an eye on those 3 mainly because every upgrade you can make here will give you quite a lot of CE!

— Upgrade your gears at all times! This doesn’t actually apply only for the gears! You should head on to the Forge -> Intensify and there always make sure you add points equally to all the equipment there! This will further boost your power!

These would be all of our Eternal Legend tips and tricks that we have for you right now! Do you know some more game tips that you would like to share with us? Leave a comment down below!