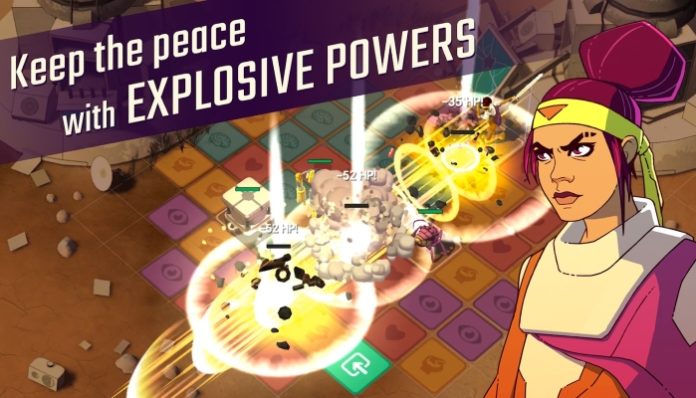 In a far off part of the galaxy lies a distant planet. On that planet is a dying colony called New Providence. A recent mining boom has created a surge of activity on other planets, and New Providence is on the verge of collapse. Stuck between a corrupt government and a deadly conspiracy, one orphan must fight to survive…

Ticket to Earth is a unique tactical puzzle RPG, blending classic RPG elements with modern puzzle games. It may sound familiar, but Ticket to Earth is styled after console strategy RPGs, giving it a unique flair amidst games like Marvel Puzzle Quest and Empires & Puzzles.

Players step into the shoes of Rose, an orphan who must fight to protect her loved ones and find a way off the doomed planet. Marauders, corrupt government officials, and other foes will get in her way, and she must learn to fight quickly!

Battles in Ticket to Earth take place on a tiled grid. On each tile lies special gems, and you draw a line from your hero to the tiles of the same color. The longer the line is, the more powerful your attack will be. You can even activate special abilities with enough tiles.

Ticket to Earth is heavy on the story, so naturally over time your characters will become stronger. You can manage and customize their skills, and even help them learn new abilities to take on harder challenges.

Ticket to Earth is available now on the App Store and Google Play Store for 4.99 USD.