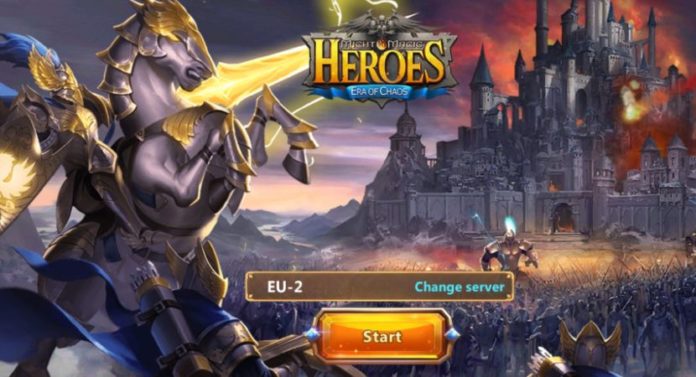 Today we have a really quick guide regarding the Era of Chaos gold keys and how to prioritize using them when purchasing the premium chests in the market. Because, if you’re here, you’re probably having trouble making the game understand that you want to buy with your keys first.

The trick is very simple and making purchases with the earned Gold Keys in Might & Magic Heroes: Era of Chaos only requires you to tick a box… but for some reason it took me ages to figure it out and probably you’re in the same situation if you’re looking for a solution.

(If you’re not looking for a solution to this, I’ll also share a general guide on golden keys below. But let’s start with prioritizing the use of your owned keys!).

Era of Chaos: How to Use Gold Keys

In order to prioritize using Golden keys in the game, first head over to the Altar from the main screen, and tap the icon to the right (where you can buy premium chests):

Once there, you have “Prioritize Using” at the bottom – but no matter how many keys you have, that doesn’t seem to happen. But all you have to do to make it work is tap the small black box next to the words, as seen below:

Remember: you can also use the keys to purchase a set of 10 (in order to get the SR guaranteed drop), but in order to do that, you will need at least 10 keys.

Era of Chaos Golden Keys: How to Get More?

Now that you know how to prioritize using Gold Keys in Might & Magic Heroes: Era of Chaos, let’s talk another important thing: getting more of them!

Since premium drops are involved, you won’t find a lot of them easily. As the game kindly tells us, it can’t be gathered through normal methods.

In other words, it is going to be offered as a reward on very rare occasions, such as when completing the Campaign, for example or randomly during some special in-game events. Also, there are various chests in the game that you can sometimes purchase and get a Golden Key as a reward.

But, for now at least, there is no way of farming these special keys. Instead, all you can do is be active and compete in all areas in the game in order to increase your chances of receiving them as a reward.

And this would be all for our quick guide to Era of Chaos Gold Keys. If you need more help with the game, take a look at all our M&M Heroes: Era of Chaos guides here.

Might & Magic Heroes: Era of Chaos Gold Keys: How to Prioritize Using Them