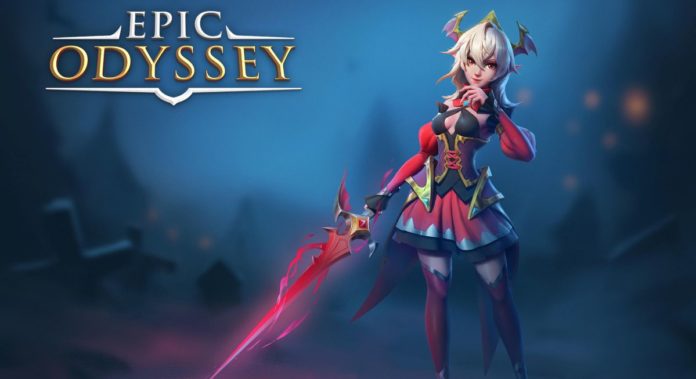 Epic Odyssey is like a gateway gacha-RPG. While it contains pretty much all of the ingredients you’d expect to find in a modern, free-to-play, hero-collecting game on mobile, it’s far more lightweight and accessible than most.

For instance, it doesn’t contain hundreds of heroes. It contains 36. And there are only three classes, along with three factions, making for a relatively modest nine possible hero types.

There’s no playable combat either. Epic Odyssey is about strategy, but not tactics, letting you choose and arrange your squads but not intervene directly in the battles, which play out automatically.

And the game is packed with idle features that let you accumulate loot and XP even when you’re not playing, or in the background while you are.

It takes a markedly casual approach to a genre that can sometimes be impenetrable and overwhelming to newcomers. And we approve.

The core of the gameplay is the single-player story campaign, which sees you romping through a series of enclosed environments arrayed across a fantasy continent called Lynea.

These environments, and the heroes that romp through them, all look terrific, with a polished, slightly cartoony high fantasy aesthetic and smooth 3D visuals. The exploration sections are almost action-RPG-like, minus the hacking and slashing.

There’s a rich, character-driven, dialogue-heavy storyline to follow if that’s your thing, but it’s totally skippable if you just want to concentrate on looting and brawling.

Each chapter contains a mixture of exploration, perhaps a fetch quest or two, the occasional very light puzzle, and several battles. Some of these are avoidable, because the enemy is just guarding a chest or standing around, and some of them aren’t.

To move around you simply tap where you want to run to, while moving in the direction of an enemy will trigger a fight.

These are 5v5 and, as we said, automatic. Your only input is to decide your formation at the outset, which basically means choosing which heroes to thrust into battle and where to put them, with the usual variables to consider – ranged at the back, warriors at the front, and so on.

There are buffs available for equipping three heroes of the same class and faction, so the strategy has a slightly deceptive degree of depth, but accessibility is the watchword.

In classic RPG fashion, the single-player campaign sees you battling away until you encounter an enemy that you can’t defeat.

This is down to inventory and character management, and you can give yourself the best possible chance by making sure your heroes are levelled up and ascended. Ascension involves sacrificing two other specific heroes to bring a hero up to the next level.

The levels are Common, Rare, Epic, and Legendary. As always, the Common ones are only fit for recycling.

Equipping the best gear is simple, too, thanks to the handy Auto Equip option. And you can level up and refine your gear, spending Gold and other gear items in the process.

Epic Odyssey never likes to make life too difficult for you, and that extends to the various other features that unlock as you level up. By the time you reach Chapter 8 you’ve got full access to all 16 areas of the game, which include the Summoning Gate, the Clan area, the Trader, the Tower, and several other features, all of which give you the opportunity to earn more loot in different ways.

Sky Hunters lets you chase down enemies in hot air balloons, for instance, while Worlds Portal lets you borrow heroes from another player to take into battle.

There are multiple idle options, too, such as the Great Hall, which keeps producing loot for you to collect at will, and Mission Board, through which you can send heroes off to complete missions in the background.

The most innovative of these areas is the Pentagram. This automatically assembles your best heroes into a team and then lets you recruit five followers from your ranks, automatically levelling them up to 40.

This makes these followers viable in battle, but not optimal, since you can’t level-them up. It’s a great way of seeing who’s worth the effort of investing time and resources into. You can find Epic Odyssey on both the App Store and Google Play.