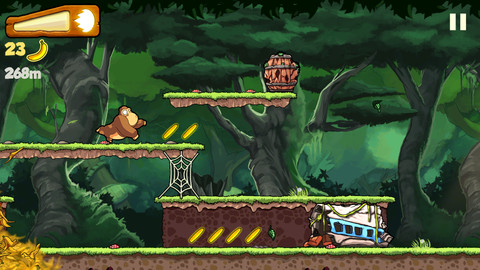 Banana Kong, the endless runner game published by FDG Entertainment now available in all regions on the App Store, has managed to become quite popular, having been downloaded 70 million times since its release back in February 2013. To celebrate this outstanding result, the team has confirmed that they will soon release a new big update for the game.

The new Banana Kong update is going to include a brand new area that is not currently available in the game, a beach area that can only be reached by riding a rocket. The area comes with its own unique set of challenges and content so you will definitely want to play the game again if you’re have put it aside once the update is available.

Banana Kong is a rather straightforward endless runner game where players will have to control the titular Banana Kong, collect bananas, avoid dangers and go as far as possible. The game has been clearly influenced by the Nintendo series Donkey Kong Country, as the game includes features such as rideable animals and more that can be found in the classic entries of the series.

Banana Kong is now available for download for free on the App Store. The new update will be released on a yet to be confirmed release date but we will let you know more about the matter as soon as possible so stay tuned for all the latest news.