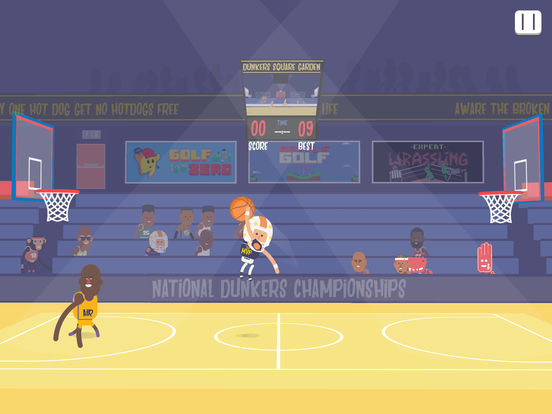 Ready to slam dunk one more time? Dunkers 2 is the sequel to simple and addicting Dunkers, a one-touch basketball game where you dunk with your wacky flailing arms! This time around there are loads and loads of characters and different balls for you to customize your player with, and different modes to hone your dunking skills in. Our Dunkers 2 cheats and tips will help you perfect your dunking game!

Dunkers 2 is the ultimate dunking game that’s easy to pick up and play and it’s enjoyable for everyone. While it may not seem like it at first glance, there is some nuance to the game so let’s get started with our Dunkers 2 cheats, tips and tricks strategy guide!

Both the backward and forward jump buttons can be held down for longer and higher jumps. The effect isn’t as noticeable with your backwards jump, but you can get some good distance when you use it with your forward jump. Short taps will make you leap a little bit, while held taps will make you launch. This is key for positioning, so remember it! Good positioning can set you up for a nice dunk; get used to the distances you can go with the different powered jumps.

Crash into your opponent!

You’ll need to “counter dunk” the ball if your opponent has it in their grubby mitts to get it back! By this we mean that your hands needs to be rotating into the ball as they collide with it, otherwise it won’t register as a steal. The best way to get this done – from our experience – is to just simply crash into your opponent as much as you can. At some point you’ll get the ball back and you’ll also be a human wall for your hoop. Not only will you eventually steal the ball, but repeated crashes will send your opponent backwards.

If you want to unlock new characters, balls, and decals, you’ll want to play Arcade Mode. Arcade Mode keeps track of your dunks, and after you’ve scored enough you’ll unlock a new prize! If you want to earn more coins, try playing Quick Game. A Quick Game is a one-minute long game where you dunk off against an AI opponent. The more dunks you have by the end of the match, the more coins you’ll earn. You can spend your hard-earned coins in the shop to unlock extra characters and stuff. Just remember that it’s all cosmetic; different balls and characters have the same stats.

But if you really want to make the big bucks, you’ll have to attempt Tournament Mode. Tournament Mode has you play through a preset amount of matches after paying an entry fee. You’ll need to win a certain amount of matches out of the set to qualify for the prize. For example, the first tournament is the Eastern Conference in which you play seven matches. You need to win at least four of them to win the 1,000 coin prize. The entry fee is 250 coins. The harder tournaments have higher entry fees with harder opponents, but the prize money is grand! Give Tournament Mode a shot once you’ve honed your dunking skills.

Slam into the backboard!

If you’re having trouble dunking with accuracy, you can also try just slamming straight into the backboard. Your character will slowly nudge their way into the hoop if they collide with the backboard, which almost always guarantees a dunk. Don’t rely on this too much though – the backboard can shatter if you do this too much, and you can’t use it as a stopper anymore.

That’s it for Dunkers 2! If you have any other tips or tricks to share, let us know in the comments below!