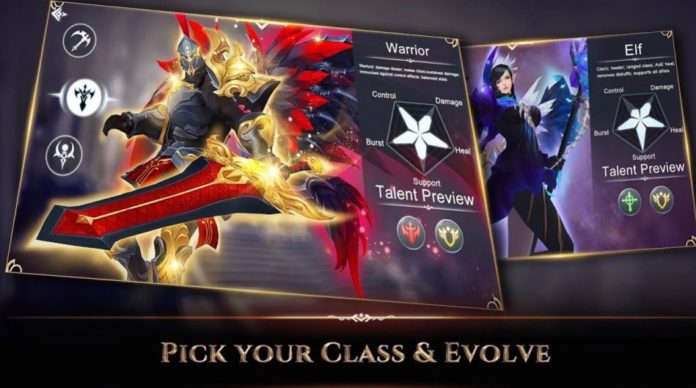 In today’s article we are going to cover all of the Dragonborn Knight tips and cheats to help you increase your BR and get more powerful, so that you can defeat all of the encounters super easy.

In the game you will have a lot of things that you can do, so if you want to learn how you can deal with all the bosses, defeat all the monsters and gear up to be able to take on pretty much anything and anyone, then look no further because we got you covered!

So, are you ready to learn all the Dragonborn Knight tips and tricks that we’ve got for you? Then let’s not waste another second and dive right into them!

Pick the right class for your play style

Right when you first open the game, you will be able to create a character and start playing as soon as you’ve done so. I suggest that you pick a class that you first like in terms of skills and range, and secondly a class that is quite easy to play.

These are all the available classes:

I suggest that you start by either picking Human or Elf, because they are super fun to play and their overall good stats will make it pretty easy for you. Dragonborn leans more towards the support side, so it might be a little difficult to solo the instances.

As for the Bloodborn, he has good damage, but it might be difficult to deal with solo dungeons too because of the not-so-high defense. In my opinion you should go for a class which has some defense or at least range, because as your first character you don’t really want to struggle too much.

Start by following the quest line

One of the best things you can do early on is starting with the very beginning: the quests. You can see the quests in the left side of the screen, and when you tap on them your character will start auto-routing.

Basically all of the quests and tasks can be completed by simply tapping on the objective and waiting for the game to complete it on its own. This is super useful because you can go about your day, while the game is continuously progressing and leveling you up.

I suggest that you spend a little time paying attention to the very first levels, because you can progress very, very fast. You will reach level 60 in a few minutes by simply following the main quest line, and that is great because you will unlock a ton of the game’s features by then (most of them).

Your skills as just as important as your gear, because they are your main way of damage. You can level up your skills every time your character levels up, so make sure that whenever you do so you upgrade your skills to the maximum possible level.

They will cost a little, but it’s definitely worth it, and because of that the game has a button which will let you upgrade all of them at once, called “Upgrade All”. Make sure you always upgrade all of the skills, because they will give you BR increase.

Another thing which will come in handy is checking in the box which will not show the skill level up notification again. Remember to always keep your skills upgraded!

Do your daily dungeons!

Every single day you can compete in a few dungeons which will give you significant rewards, such as tons of exp, equipment and more. I suggest that you do your EXP Dungeon especially, both times every day (because you can do it up to two times a day) because the EXP is a lot!

Another super useful dungeon is the B Pet Pound dungeon which gives your Pet exp. Make sure you do these two, and the others also if you have time, because they will come in handy in making your character more powerful.

Another dungeon which I recommend is the EQPT Dungeon which will give you random equipment, so if you are lacking in that department, this is definitely a must-do dungeon.

In the top side of the screen you will see an option called “Bonus” which has a gift for an icon. Tap on that and head on to the Wishing Well tab! You can make a wish for free every day, 5 times a day!

Every day you will be able to summon a new Battle Pet, which can accompany you and make you deal with the enemies much easier. Simply head on to the Summon Battle Pet option in the top side of the screen, then tap on the “Explore” button in the bottom right side of the screen to explore and try to get a high quality pet.

Make sure you do this every day, because it’s free and you never know if luck might knock at your door or not!

Other Dragonborn Knight tips and tricks:

– Claim your free pack once you reach level 60! Head on to the top side of the screen and claim it by tapping on the “Free Pack” option!

– Sign in every day to the game to claim free rewards! Make sure you log in every day to claim those rewards, even if you don’t really plan on playing that particular day, because when you will play you will definitely benefit from them!

– When you are fighting bosses, you can tap on the “Cheer” option and buy with Coins some boosts to your damage! You can do this several times, because they will stack!

– When fighting, make sure you are dodging the charging red carpets, because that’s where the most damage will happen. I suggest that you either walk, or tap on the boot icon which is “Dodge” next to your skills, do dodge the skill in the opposite direction.

– You can check out the Auction House to either sell some good items that you picked up, or to buy something that you like. This is usually the place where you will see mostly the super powerful end game boss drops, so expect the prices to be pretty high.

– Don’t use auto battle when fighting the super powerful bosses – instead use the manual fighting mode because that way you can dodge the incoming attacks much easier and survive for longer.

These would be all of our Dragonborn Knight tips and tricks that we have for you right now! Do you know some more useful game tips that you would like to share with us? Leave them down in the comments section below to be shared with everyone!