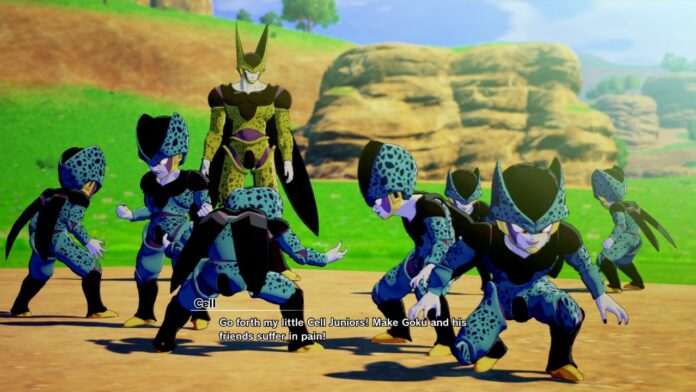 During the Cell Saga in Dragon Ball Z: Kakarot, the titular bad guy of the narrative arc organizes the Cell Game, a twisted version of the classic martial arts tournament where he is the star of the show, and the only opponent to beat.

Despite this tournament being a one-versus-all affair, Cell isn’t exactly alone, as he will unleash the Cell Jr. androids against all of the Z Warriors in the attempt to make Gohan angry and unleash his full potential.

Here’s everything you need to know to defeat these smaller but nonetheless powerful versions of Cell.

How to Defeat Cell Jr. in Dragon Ball Z: Kakarot

You will fight multiple Cell Jr. at the end of the Cell Saga using Goku, who will be accompanied by Vegeta and Trunks as support characters. Despite them not being on the same power level as Cell, the small androids can be annoying to take down.

The Cell Jr.’s moveset is limited to three special attacks, alongside the regular melee combo. While Destructo Disk is easy to avoid, the Kamehameha and Solar Flare are way more insidious. The first one has a very short charging time, making it very hard to dodge properly, especially when fired by multiple enemies, while the second leaves you defenseless for a short while, and the only way to avoid getting stunned is by getting as far away from the enemy as possible, which is difficult to do in this battle.

With multiple Cell Jr. taking part in this fight, it’s pretty much impossible to avoid getting heavily damaged, so the best strategy is just to go all out and focus on one enemy at a time. A healthy stock of restorative items is extremely recommended, especially at Hard difficulty, as you will be damaged a lot during the fight, and you will need to heal often. Keep at it, and you will eventually win.