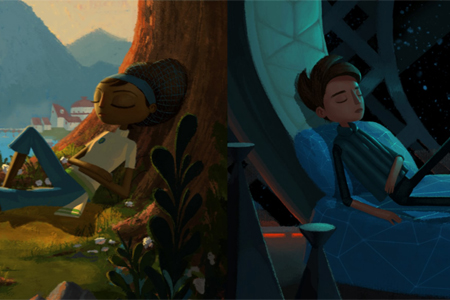 The highly successful point and click adventure Broken Age is now available for purchase on the App Store.

The game has been one of the more successful Kickstarter campaigns ever, managing to gather over three million dollars during its duration.

Broken Age’s gameplay experience is as old school as it gets. During the game players will control two different characters, each one located in separate worlds. It’s possible to switch at will between the two characters, without them ever interacting in any way. Unlike old scholl games, however, the interface feature context-sensitive actions instead of the old verb list. This feature has been included so to give the game a more modern edge, despite the classic gameplay experience.

The gameplay experience isn’t the only thing that makes Broken Age such a great game. The plot and characters of the game are just as good as the gameplay, with the two characters feature adding more to storytelling.

Broken Age is now available for purchase on the App Store. The game is only available for iPad at the moment. Make sure to check it out if you like old school point and click adventures, as Broken Age is definitely one of the best, if not the best, released in recent times.