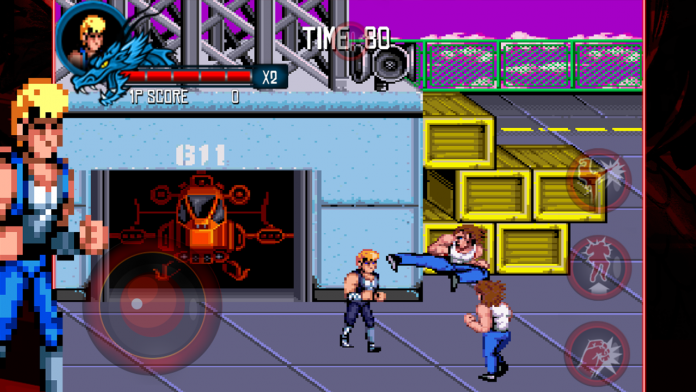 The Double Dragon series is one of the most famous gaming franchises released so many years ago, back when the whole gaming industry was starting to move beyond its infancy. There’s not a single gamer who has grown up during the 80s that doesn’t know the first Double Dragon game. I know I have wasted so much money on the first game that I probably would have been able to get an arcade machine.

Younger generations of gamers probably don’t know anything about the series. But it really isn’t their fault, as, after the first game, things have gone downhill from the series, with some bad games that have brought an end to the series and to the team that developed the game. Transforming the franchise from a side scrolling beat’em up to a Street Fighter clone wasn’t the smartest of moves, as it ended up alienating the existing fanbase without being able to bring new people to the series.

Despite these issues, old school gamers still hold the first Double Dragon game dear. This reason alone justifies the purchase of Double Dragon Trilogy: being able to play on the go such a gem is a really great feeling.

Double Dragon Trilogy has been developed by DotEmu, who certainly isn’t a newcomer in emulating classic games. The team’s experience is evident in this port, as all the three games are arcade perfect ports, barring the touch screen controls.

Being sidescrolling beat’em ups, there’s no need for really precise input so the touch controls work incredibly well in the context of this port. Controller support is not yet available but should be introduced soon.

Among the three games, the first Double Dragon is clearly the best of the bunch. The game has stood the test of time quite nicely and it’s just as fun as it was so many years ago. You will control the Lee brothers as they try to rescue poor Marian, who gets kidnapped by a band of thugs for unspecified reasons. Thugs that will be brutally crushed by the extensive moveste and weaponry that the Lee brothers have at their disposal. At the end each stage you will have to fight a boss, who will prove to be quite a challenge if not approached properly.

The second and the third game of the series weren’t as good when they were released and the same holds true for the iOS ports. Some gamers will probably enjoy them, as the gameplay experience is not too different, but it’s an undeniable fact that the first game is hugely better than the other two.

The real fun in Double Dragon is playing the game together with another player. DDT comes with multiplayer enabled, allowing two players to play together by using two devices and Bluetooth. Unfortunately the multiplayer mode of the game is really broken, with music glicthing, characters disappearing and more.

Double Dragon Trilogy is a perfect port of the three arcade games of the series. There are no new contents, aside from touch screen controls, but the gameplay experience is just as fun as it used to be back in the day. Nostalgic gamers will definitely enjoy the Trilogy as much as I did, while younger gamers may want to see what the series is all about before purchasing. These are old school games, after all, with all the short comings that come with old game design.