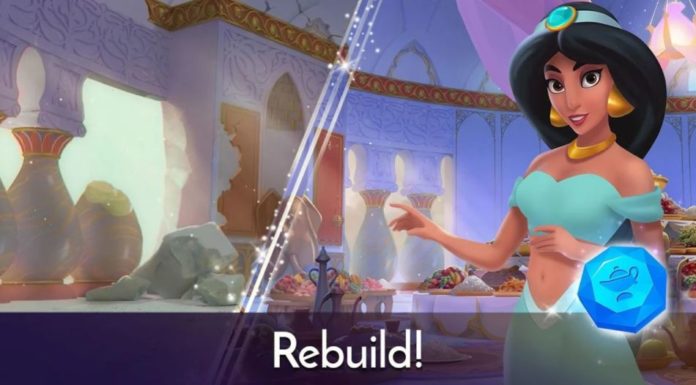 In today’s article we are going to cover all of the Disney Princess Majestic Quest tips and cheats to help you pass all of the game’s stages easily and unlock more princess!

Since this is a beautiful match three game, it makes me want to play it quite a lot so therefore I will help you progress a bit by sharing all of the tips about the game that I know of and teach you how to play Disney Princess Majestic Quest!

So therefore if you are ready to learn all that there is to know about this match three Disney game, let’s not waste another second and dive right into the Disney Princess Majestic Quest tips and tricks right here below!

Log in every day to claim your Daily Bonus!

Every single day that you will simply log in to the game you will be able to claim a reward which comes completely free! This can be anything from Coins to various boosts to help you pass the stages much easier, so I suggest that you claim them!

In my opinion you should log in and claim them every day even if you don’t really plan on playing the game that particular day, because they will add up and when you will need a helping hand or a little boost to help you pass a stage those will be super useful.

Also, on the seventh day the rewards are very good, so try to keep logging until then and claim the super reward on the day 7! That will be better than anything that you collected this far.

Spend Keys to unlock more Princesses and their stories!

At the moment you can play to unlock three princesses: Jasmine, Belle and Ariel. There will be more added to the game, but for now those are the only ones which you can play with and learn their stories!

Jasmine is the very first princess, and she is unlocked automatically when you start the game, and she will come along with Aladdin and all the stories that they share together! But you don’t have to stick to playing her and unfolding her story more if you don’t want to – once you have unlocked some Keys, you can unlock a new Princess!

Belle is the Disney princess from The Beauty and the Beast and she is the second princess available for you to play (and my favorite). To unlock Belle you will need 5 Keys and her story will feature Beast and several other characters from her story!

Ariel is the third Disney princess which you can unlock, from the Little Mermaid, and she will cost 8 Keys to unlock her and her story. This story is a very beautiful one to play in, and if you like Ariel then this is the one which you should aim to unlock once you have saved a few Keys!

Keep track of your lives

Now this is something which you need to keep your eyes on if you are dealing with tougher levels, because each time you fail a level, a life will be depleted from you, so you will need to keep track of them.

The lives refill over time, so check the timer near the lives icon which shows you how long until you will have a new life!

You can instantly refill your lives by using Coins, but if you are not really in a hurry, then I would suggest that you don’t waste your Coins on this and rather just wait it out because you can use the Coins to revive when you are dealing with a difficult stage.

Make a lot of matches

In the game you should focus to make a lot of matches before your moves end so that you can make as many points as possible. This will help you collect many Coins and those will come in handy when you want to unlock various stuff.

Either way, just try to match as many blocks as you can, but keep an eye on your moves because you don’t want to exceed the moves which you have! The level will end when you have reached the objective that it requested you to complete, or if you ran out of moves before completing it (which is bad), so try to always do as many things as you can while still following the objective and moves!

Play more stages to collect Stars then spend them all together

If you want to enjoy the game’s story more, then this way is better because you can enjoy multiple sequences of the story by unlocking them one after the other. All that you need to do is play multiple game stages one after the other and collect Stars. Now instead of using the Stars which you are collecting immediately after, you just save them until you have about 15-20.

Then, once you have collected several Stars, you can go on ahead and unfold the story! I have found that for me this works way better because I am enjoying the story more when I can follow it constantly instead of stop and play several levels to unlock more stars.

Now you can decide for yourself which is the best, but I definitely suggest that you try to do this.

A little tip: You don’t have to stick to playing one story at a time – once you have collected enough Keys to unlock another one, you can go back and forth between them and play them all at once. All that you really need is to collect Stars, so don’t give up!

If you own a Facebook account, then you should definitely connect the game to Facebook so that you can ask your friends for free lives! This will come in handy during the later and more difficult stages, because you will probably fail them a bit.

So try to connect your Facebook account to the game by tapping on the lives -> Ask for Lives -> and in the window which pops up, you can connect the game to Facebook! If you have other friends who play the game they will also probably ask for lives, so don’t forget to give them!

You can only ask for lives once a day, so don’t forget to do it whenever you have the chance!

Learn how to form the special blocks

The special blocks will help you pass the levels much easier and faster, and if you are still not sure how to complete them, then let me shed some light on them for you:

– Butterfly: you get this when putting together 4 pieces in a square shape. It will take off and destroy a block that you need upon level completion.

– Rocket: you get the Rocket when matching 4 pieces in a line, and once activated, it will destroy the blocks in the same line that it is pointing towards.

– Bomb: you obtain the Bomb by matching 5-6 pieces together in a T shape and it will create a large radius explosion.

– Tonic Potion: you get this from making a 5 blocks in a row combo and if you match it with any other piece, it will turn the other pieces of the same color on the table to the color of that one piece you matched it with.

Watch an ad to get some free Coins rewards!

In the bottom right corner, right above the Play button, you will see a small blue bubble which will offer you some free Coins in exchange for watching an advertisement! If you are short on Coins or simply want to benefit from this, then definitely watch an ad (or more) to claim free Coins!

To pass a stage much faster, the safest way to do so and conserve moves in the process is to match multiple special blocks! This will activate double the bonuses (from both the special blocks) so you will have double bonuses with one single move!

Some of my favorite combos which you can make are the Tonic Potion + Bomb, because when you match the two, it will create bombs in multiple places on the board and once those explode, it will pretty much set you up for success quickly! Another good bonus is the Butterfly + Bomb because the Butterfly will fly and take the bomb in one area which you need for level completion!

Use the Boosters if you’re stuck!

Those Boosters are of 2 types: one of them can be activated at the beginning of a stage, and the second one can be found on the right side within the stage. The first, you can choose to activate them when you are dealing with a level which is particularly difficult by default and that will help you clear it out soon!

The second, you should use if you are also in a difficult stage and only have a couple of moves available but still need more for level completion. By using the in-stage boosters, those will help you save some moves and probably help by you not having to repeat the level!

Don’t save the boosters forever! Just use them when you find yourself in a tough situation because that’s why they are made!