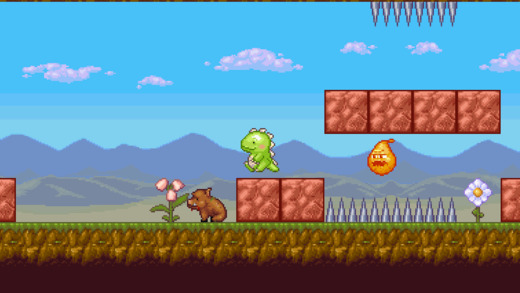 In the past few years, several video games released on the App Store have been trying to bank on nostalgia, offering gameplay experience and presentations inspired by old school classics. Some of these games manage to stand on their own while others would be mediocre games even if released 20, 25 years years ago. The first game developed by Australian team Craigeatscrayons, Dinofour, definitely belongs to the former group, as the platform / puzzle game from the team is an excellent title that no fan of the genre should pass on.

Dinofour’s premise is incredibly simple. Players will have to control four different dinosaurs, all with unique special powers, and guide them to the end of each of the over 70 stages while solving a variety of puzzles in a gameplay experience that’s reminiscent of The Lost Vikings, a classic platform game developed by Blizzard released years ago on consoles and PC.  The special powers of the four dinosaurs aren’t exactly new, as they have been included in plenty of other platform games in the past, but work incredibly well in the context of the game and of the puzzles, which are incredibly variety: some of them require all four dinos’ powers to clear, while others only some. The huge stage variety is also one of the game’s strongest features, as it makes the experience always feel fresh and forces players into adapting to a new situation in each stage.

While some of the later stages are more complicated affairs, Dinofour never feels like a chore to play, thanks to their short length. The longest stages players will be playing through will probably take no more than a minute to complete, granted the player knows what he’s doing. The incredibly quick pace is another one Dinofour’s excellent features which make it perfect to play on the go.

Despite its quick pace and cute presentation, Dinofour can be a challenging game. Some of the later puzzle’s can be  very tricky and the lack of a check point system can make things a bit frustrating. This is probably the only real issue of the game, as checkpoints might have made some of the more difficult stages less frustrating. It’s a minor complaint, that’s for sure, but it does impact on the experience a bit for less experience players.

For being the first game developed by an indie team, Dinofour is a really good title. The game has been nicely crafted to offer an experience that can be though but fair even though the lack of a checkpoint system does impact the experience a bit. Craigeatscrayons has managed to create one of the best retro inspired games of the year and I am curious to see what they will come up with in their next game.

You can download Dinofour on the App Store here.