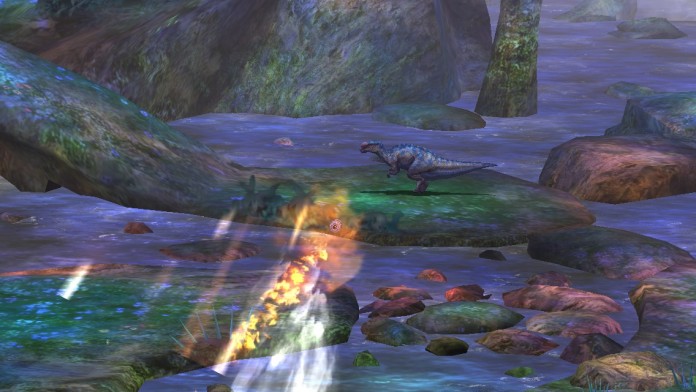 Hunting games can definitely be controversial and there’s really no need to explain why. Even though players may be shooting at virtual animals, there’s still something unpleasant about shooting deers and other animals. This hasn’t prevented Glu Mobile to develop a series of hunting games that have managed to be more successful than expected. Luckily for all animal lovers, the new hunting game developed by Glu removes the most unpleasant aspect of hunting by removing animals and replacing them with everyone’s favorite giant reptiles: dinosaurs.

Dino Hunter: Deadly Shores is a really nice game that makes hunting dinosaurs quite satisfying. The gameplay experience is actually more deep than anticipated and quite varied. In this first person shooter you will be tasked with completing a variety of challenges that range from simply killing some dinosaurs to having to deal with a lot of them and more. Later stages require gamers to think long and hard about their approach, as a wrong strategy will surely lead to failing the mission. The Dino Hunter: Deadly Shores gameplay experience is made even better by how the dinosaurs react when you miss a shot. Some of them will try to retaliate, while others will simply run away. This forces gamers to be focused at all times, since a missed shot may mean death.

As we already mentioned, Dino Hunter: Deadly Shores gameplay experience is more varied than expected. There are three different regions in the game with each one coming with unique challenges for each weapon type of the game. Trophy Hunt mode adds even more challenges to complete and bosses to defeat, which can only be accessed after purchasing specific upgrades.

The game also looks quite nice, with dinosaurs being quite detailed. The presentation is no less nice since a series of nice touches make the hunting endeavor almost over the top and quite fun. The final shot in each stage is rendered in slow motion, with a fanfare playing right after the dinosaur is down. It’s the kind of mindless fun that sometimes is expected out of video games and a welcome change from games that take themselves way too seriously.

Being a free to play game, Dino Hunter: Deadly Shores comes with plenty of IAPs as well as a stamina system. Unfortunately the game is ultimately damaged by the way IAPs have been implemented, as you will require a lot of gold to purchase the optional exotic weapons, which in turn unlock more of the game’s content. The game is also filled with ads which appear way too often. It’s a really shame, because without the free to play mechanics, Dino Hunter: Deadly Shores would have been a remarkable experience with a nice and varied gameplay experience and excellent presentation.