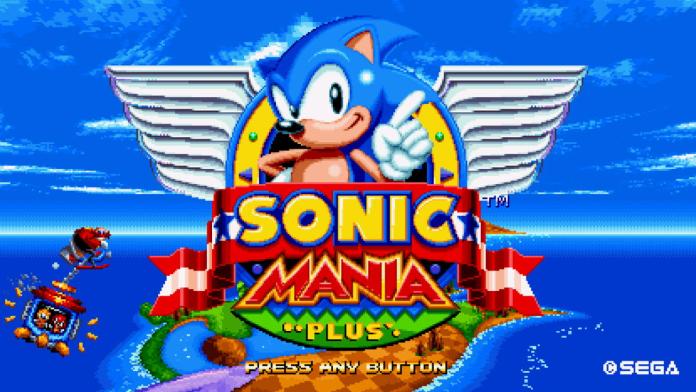 When Sonic Mania released back in the Summer of 2017, Sonic fans rejoiced, as the game brought back Sonic’s glory days. While the next main game, Sonic Forces, had lukewarm reception, the developers behind Mania came back for a DLC pack titled Sonic Mania Plus, much to the delight of fans. Today, we’ll show you the differences between Sonic Mania Plus and Sonic Mania!

Sonic Mania Plus, also known as the Encore DLC, is a 4.99 USD separate purchase that is available on all platforms where Sonic Mania can be purchased.

Once downloaded, Sonic Mania Plus has some new features for veterans of Sonic Mania. First and foremost, the main attraction is Encore Mode, a new mode that is essentially a “remixed” play through of the main story, this time with a brand-new prologue and epilogue.

You’ll play through the same eleven zones that were featured in the original Sonic Mania, but this time they have different color palettes and slightly tweaked level design, mainly to accommodate the new playable characters.

Speaking of which, Encore Mode also brings back two relatively obscure Sonic friends: Mighty the Armadillo and Ray the Flying Squirrel, who originated from the 1993 arcade game.

Mighty the Armadillo can safely walk on spikes thanks to his protective shell, and he can curl up into a ball and slam down with extreme force. Ray can fly up and down throughout the air as long as you control him carefully, similar to the cape from Super Mario World.

Encore Mode also utilizes a “party” system. Instead of the usual lives system, there are new monitors in Encore Mode that add more characters to your group. You can max out at five characters, and you can switch freely between your two most recent characters.

Should you lose a character, the next character in line will take their place. If you lose all of your backup characters, the game will be over, so be careful!

When you want to take a break, there are new pinball special stages, which can be accessed by jumping through the spinning star rings above checkpoints. You can earn power ups and the like in the pinball machine.

Sonic Mania Plus also expands on the Competition Mode, as it can now host up to four players instead of the previous two. There are new maps to play on, so if you have friends that like to race, why not try it out?

Last but not least, for the speed runners out there, Time Attack now allows you to save replays of your best runs. If you’ve broken a personal best, save a replay, so you can savor the moment!

Those are all the main differences between Sonic Mania Plus and Sonic Mania. If you have any other questions about the differences, let us know in the comments below!