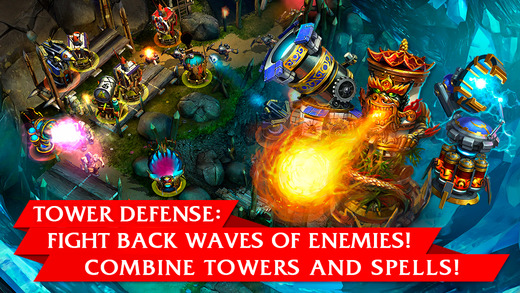 The cataclysm that shook the Prime world left an incredible energy system in its place: the Prime system. Powerful energy is encapsulated inside cards, and now it’s up to you to take advantage of these cards to defend what’s left of the Prime World. Defenders is a tower defense game with a card-collecting twist. All of your towers are cards and you can level them up in classic RPG ways. Tower defense games are all about strategy so we are here to show you the best tips for dealing with enemies in our Defenders cheats, tips and tricks strategy guide.

We’ll help you power through the Prime World with our Defenders cheats, tips and tricks strategy guide. Let’s get started!

1. Examine the enemy counter before you choose a level!

When you select a level, you get to see all the information about it, like the rewards, achievements, but most importantly the enemies. The enemies all have a “play button” symbol that represent what kind of enemy they are. Small triangles represent weak enemies. The bigger the triangle, the stronger the enemy. For example, the tiny Kobolds are represented by small triangles, while the heavier Satyrs have big triangles. There are also specially designed triangles for specific enemies, such as the Harpies, who have a triangle with wings on it. It is especially important to check a level to see if it has flying enemies, as some towers are designed to only attack flying enemies!

3. Complete the achievements for extra coins!

Each level has two optional achievements that you can shoot for. Trying for them makes the levels a bit harder, but you’re rewarded with extra money! For example, some levels will ask that you to not build more than one of a specific tower, and it’s more than likely a tower that would really help on that level. Don’t feel pressured to do these on your first attempt of a level, as they are challenging.

Attack towers, such as your wooden towers, should be placed near your status-inducing towers. Use your poison and slow towers to slow and enfeeble the enemies, while your wooden towers will pelt them as they try to make it through. You have a limited amount of space on each level, so be sure to strategize. If you want to switch it up though, all you need to do is sell an existing tower. Be mindful of tower placement!

5. Use the forge to create awesome towers!

When you beat level 4, you gain access to the Forge. The Forge lets you combine your cards to make a single card more powerful, and you can even evolve cards. Evolving a card grants it a new upgrade option during a level. When you have enough money, you can upgrade the tower during the level to make it more powerful. The process is just like any other fusing process: you sacrifice your other cards to make a single card better, and during evolution you must have two of the same card to evolve one of them.

There are three trees in the talent tree: prime, technical, and magic. Prime deals with your prime generation during levels, technical involves your towers, and magic deals with other properties. Almost every single one of the options are useful, so I would advise to get them all! The one I’d pick up at the beginning are Enhanced Grindstone, which increases the damage of your towers by 5%. After that you can’t really go wrong with whatever you choose, so if you have extra coins, buy some talents!

7. Your magic only runs on cooldowns. Don’t hesitate if you need it!

Magic are special abilities that can be casted during levels. The one you start out with drops a bomb anywhere on the field, and it’s good for doing damage to a big group. They cost nothing to cast, but they usually have a significant cooldown. That said, use them if you need to, as they can help you get out of a bind!

Hopefully these tips will help you stop the Touched from taking over the Prime World. If you have any other questions or suggestions, leave a comment below! Until next time!