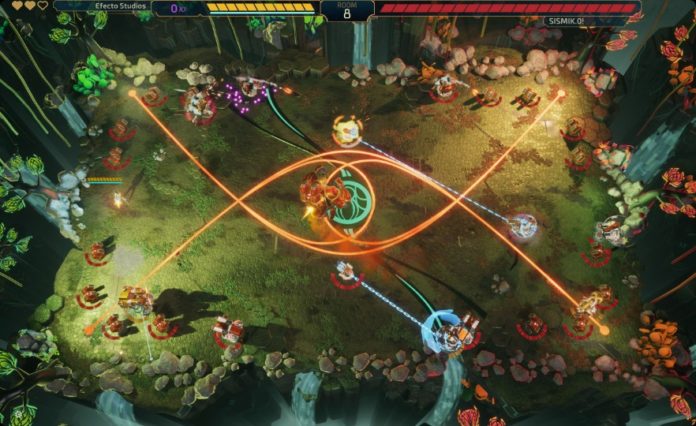 Welcome to Decoherence, a real-time tactical shooter that puts you in the shoes of a mech pilot. Deploy powerful bots around the battlefield and use tactics, power-ups and super mechs to dominate your opponent!

As you learned in the tutorial, you can order individual bots around to perform a set of tasks in order they are given. If you do not assign a bot any commands, they will simply move towards the enemy base and attack anything in side.

With commands, you can play out specific strategies that may work better. Do you have your frontline rush in, then delay the backline so that they sneak into the base while the enemy bots are distracted? This is just one example of how you can use commands to your benefit.

It is perfectly fine to just the let the bots decide on their own, but good strategies are key to taking down some of the harder opponents.

Do not approach bots directly on foot!

Every pilot has access to their own sub weapons and main weapons, but this does not mean that you should approach enemy structures or bots head on! Your pilot is very fragile and they will go down in several hits from enemy attacks.

With some careful maneuvering and the right gear, you can actually take down enemy bots and even pilots. But just remember that if you go down, that’s it – you will automatically lose. Only be risky if it is really necessary and you have an escape plan.

When you put your bots down, bear in mind that they cannot be respositioned once place. If you want to move them, you will have to recycle the current bot on the field, and this will only refund about a fraction of the bot’s original KW cost. This is very wasteful and inefficient if you recycle too much.

When you are putting down bots, make sure not to accidentally put them in the wrong place to ensure that you are getting the most out of your KW.

Before you jump into online play or the Entropy mode, we highly recommend you play a few VS A.I skirmish matches to get a feel for how the game flows. The tutorial teaches you the basics, but you will need some actual field experience to understand the individual mechanics. You can also test out your squad is a stress-free environment in the Test Field.

Once you get a few matches under your belt, you are almost ready to hop into competitive play. The first thing you will need to do is to adapt and create your own squad!

Your squad is comprised of five components: your bots, power-ups, microbots, pilot, and mech. There is a lot to cover here, so buckle up and get ready!

The first and most integral part of your squad are your bots. Your bot selection is determined by what action and base components you pick. Action components grant abilities, while base components change how your bots move.

When deciding on components to use, try to build a strategy. Do you want to have a full offensive team with mortars, blasters, and gatlings? Or do you want to mix in some defensive and utility components like the laser, barrier, and healer?

The base components are just as important. There is an endless amount of combinations, like a heavy gatling tank that leads the way? Or how about a healer buggy that can get around the battlefield quickly, healing your bots along the way? It is all about potential combos and how well they synergize. Try to make combos that work well together!

Power-ups are upgrades that stick on a bot until they are destroyed. The right power-ups on the right bots can make the strongest bots even stronger.

Power-ups are divided into three types: alpha, beta, and gamma.

Alpha Power-ups – Equip up to 2

Beta Power-ups – Equip up to 3

Gamma Power-ups – Equip up to 3

Remember that you can bring up to a total of 8 power-ups with you into battle.

SloMo Field is good for the melee type bots, as it will help them get closer to their pray. Shield is good on a heavy bots that can take a lot of punishment, and the shield will make them even tankier. Respawner is good for important stationary bots, like Healers or Mortars.

Knowing what to apply to which types of bots is ultimately up to you, but like almost everything else in the game, there are tons of effective combos!

Microbots are cost-effective, cheap little mobile bots that can provide minuscule beneficial effects on the battlefield. If you have left over KW, you can spend it on some microbots. You can bring up to 2 types of microbots with you into battle.

Microbots can be helpful in a pinch, but do not prioritize your KW on them, unless you have a specific strategy built with them in mind.

Your pilot can bring with them 2 primary weapons and 2 secondary weapons into battle. Each pilot also excels at different areas, so choose the one that fits your playstyle!

If you like to pilot your bots, we recommend using either Sabrina or Sam for the bot buffs. If you like playing a little dangerously, AI’s huge attack boost but low HP and SPD boost can really destroy enemies if handled right. When in doubt, Tadashi is also always a good choice!

For primaries, we recommend using the default Steel Piercer or the Handgun. The Assault Rifle seems way too inaccurate to be reliable, and the Electric Baton puts you in too much danger, even though it can be helpful in a pinch.

For secondaries, they are all really good. The Personal Shield enables more aggressive plays or it can save your butt, which goes for the Agility Boots as well. Grenades are great for taking out bots that are placed too close together.

At long last, we have reached the final section of squad building: the all-mighty mechs! Mechs are called down upon the final rounds of a PvP match, and they are very powerful bots that can turn the tide of battle.

For your weapons, we have the Mecha Gatling and Grenade Launcher. The Gatling Gun deals good damage over time, just be careful not to fire it for too long as it will overheat. If you are looking for something with more area damage, the Grenade Launcher is the better choice.

You can equip either weapon on either arm, so you could rock two of the same weapon if you really wanted to, or be balanced and have both of them. The choice is yours!

For your chassis, you can pick the Bulky or Agile chassis. The Bulky one is slow but has high HP, and it can use a powerful stomp attack to smash nearby enemies. The Agile one has less HP but can get around faster thank to its dash jets.

And with that, there is our guide on squad building. We have listed only a few examples, and that is the beauty of Decoherence – your success stems from your creativity! If you have any other strategies or examples you would like to share, be sure to leave a comment!