The long awaited sequel to the popular zombie shooter, Dead Trigger, is finally here and provides the mobile FPS fan with the immersive, exciting and fluid game that they have been waiting for. The sequel improves on its forerunner in every way, from the graphics, to the controls and the sheer playability and this will undoubtedly prove to be a well-deserved hit for developers Madfinger.

The story is nothing original, relying on that fallback of a thousand books and movies, the zombie plague, which has spread across the world and wiped out all but a few hardened survivors, leaving it populated largely by the shambling undead. As one of those survivors, you must join the Global Resistance and fight back, using a variety of weapons, both ranged and melee, in a last desperate bid to take back the world. This quest sees you travel across the US and further afield, exploring alleyways, mines and even the African desert, blasting the zombie hordes apart with your ever increasing arsenal.

Although the story might not display a huge amount of imagination, it’s not really that important and instead serves as a solid background to an excellent shooter. The next element to mention must surely be the graphics, for they truly impress the moment you load up the game. Colours are vibrant, water reflects realistically, environments are highly detailed and zombies burst apart in a satisfying display of gore. For a mobile game, this is remarkable stuff and really shows what can be done with the hardware when a talented team gets to work. 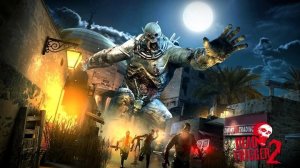 Another big improvement on the prequel is the control scheme. Previously, moving, looking and shooting could be awkward and clumsy, with frequent unwanted reloads due to the proximity of the buttons. Here, the system has been altered dramatically to render it much simpler to use. The default system sees the player move with a left virtual pad, and look with the right, while shooting is conducted automatically when an enemy comes into your sights. Although some fans might disdain this removal of control, for casual players and those looking simply to have a good time, it works supremely well.  The system can be adapted to suit personal tastes, but the autofire approach really makes things much more fluid and responsive, allowing players to simply get on and enjoy the game.

This time around there is also a stronger focus on story-based missions, rather than the endless waves of the previous game. They are still not overly complicated or involved, but the shift in emphasis does make for a more satisfying experience. The story is supported by the optional side-quests and which require the player to complete time-based actions, sniper or escort duties or locate valuable resources, in return for bonus cash and gear.  There are also global missions, which are directly affected by the actions of players worldwide. Players can even tune in to a radio station to keep track of the Global Resistance’s progress and this really adds to the sense of participating in a worldwide struggle against an unstoppable onslaught.

Zombies too are more varied than previously, with a number of unique types thrown in amongst the typical shambling brain-munchers. These include the Kamikaze and the Vomitron, and all require heavy duty shooting and creative use of your environment in order to evade their clutches. A flexible crafting system has also been introduced, with different characters introduced through missions opening up various upgrades and add-ons, which can be tailored to suit your own style of zombie-slaying. For example, the Medic produces health boosts to get you through tough levels, the Gunsmith provides you with weapons (including shotguns, sub-machine guns and crossbows), the Engineer uses his expertise to create useful gadgets and the Smuggler allows you to trade gold for exclusive goods such as damage, health and money boosters. All can be upgraded to enhance production and open up new kit, providing a wide range of ways to spend your hard earned cash.

As far as mobile shooters go, this one really does tick all the boxes. It is visually impressive, with imaginative level design, while the crafting system adds a nice degree of customisation and choice. Weapons are fun and gratifying to use, particularly the sniper rifle which can pop heads off or knock down two zombies with one bullet. Perhaps most importantly, the movement system is a massive improvement over other shooters, and is both smooth and intuitive, making the player feel as if they are really in control of their own actions. Dead Trigger 2 is the FPS that mobile devices have been waiting for, providing something approaching console-quality gameplay and quality in a package that can be taken and enjoyed anywhere.