Home Guides Dead by Daylight Portrait of a Murder Chapter: What We Know So... 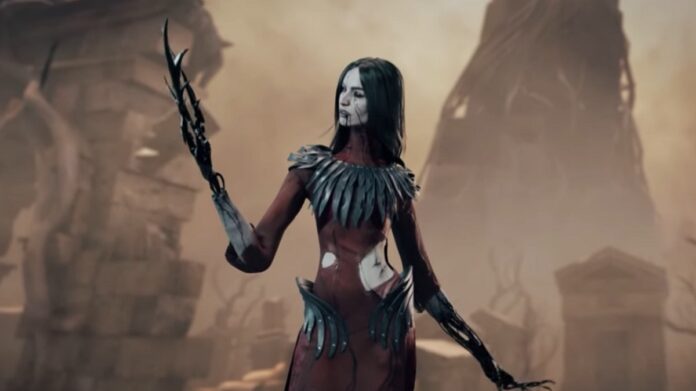 Dead By Daylight: Portrait of a Murder has been announced as the 22nd chapter in the asymmetrical multiplayer game. Dead By Daylight is currently testing its new killer, survivor, and map in a public test build (PTB). Behaviour Interactive announced the latest original killer and survivor in a teaser trailer released on the 9th of November which also showed the brand new map coming to the game. Gamers on PC have been able to check out the new chapter in the PTB and are excited by what they have discovered. Find out more below- and beware, there are spoilers to specific elements of the game including the abilities and mori.

The new map is a large, bright map inspired by The Artist’s painting. Black ink drips upward from the ground, and a huge towering building stands in the middle of the map. Inside is a library of books, and The Artist’s nest at the very top. Crows fly around the building ominously.

The brand new original killer for chapter 22 is The Artist, also known as Carmina Mora, a young woman transformed by The Entity into a half-crow, half-woman with deadly powers. Her story is one of the longest and saddest in Dead By Daylight lore, and well worth a read if you want to know more about her background and motivations. She is a tall woman with long dark hair, who has bird-like movements and black ink dripping from her eyes, mouth, and hands which have been transformed into inky claws.

Dire Crow: When a Dire Crow is summoned with the ability Birds of Torment, it can stay in the environment temporarily. This time can be extended by summoning another Dire Crow. The crows can be propelled into flight by tapping the ability button- this transforms the Dire Crow into a flock of individual crows. The crows can cause damage to a survivor if they are hit within the length of the flight path, or they can swarm the survivor if hit further away. When a survivor is being swarmed by the crows The Artist can see auras of the crows around the survivor. The survivor is also revealed with Killer Instinct (a red pulse).

Swarming the Survivor: The swarm can be seen as a white auras of the birds as they surround the survivor. The survivor can attempt to repel the crows as they swarm but cannot perform any other action as the repel them, such as throwing pallets or vaulting. The crow swarm can also be repelled if the survivor jumps into a locker. If a survivor is hit with a second Dire Crow, they will be injured or put in a dying state (if already injured).

The mori for The Artist is one of the best in the game so far. The killer plunges her inky black claws into the survivor’s face, filling them with a Dire Crow which then explodes out of the survivor’s chest and bursts into a swarm of crows. Pretty spectacular and gory to see.

Johan Vasquez is a mathematical and logical man who is tormented by the casualties caused by his work with the CIA. His perks are inspired by his bitter regret of the damage caused, and his need to make things right.

That’s all we know so far, and some of this information can change once PTB is over but we will keep you updated. Thank you to LawrieBird on Twitch for the PTB images and excellent gameplay.

Dead by Daylight Portrait of a Murder Chapter: What We Know So Far