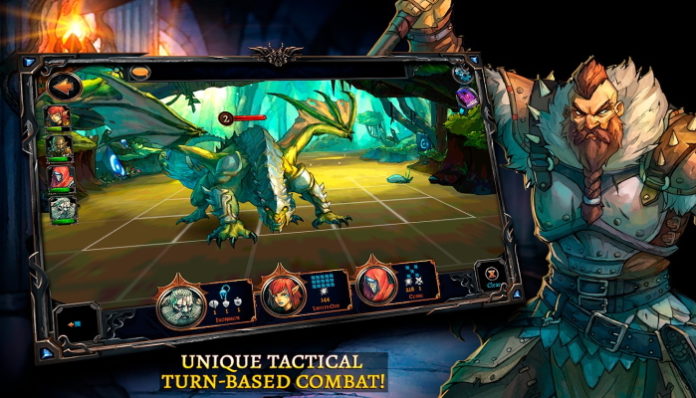 The Great Dragon War has reignited! Are you prepared for battle? Dawn of the Dragons: Ascension is the exciting sequel to the tactical grid-based RPG Dawn of the Dragons. Players will lead a ragtag band of heroes across the land in an attempt to take down the Dragon Armies.

Learn the basics of the battle system!

Dawn of the Dragons: Ascension features a grid-based battle system where all attacks target specific spots on the grid. To attack monsters, simply drag battle actions and align them where you want to hit on the grid and watch sparks fly.

Tapping on an attack at the bottom of the screen will bring up a small info panel that shows you the details of the attack. If you are ever unsure of what all those little icons mean, just take a quick peek at the details.

Mastering this battle system is a lot of situational awareness and knowing when to use what moves. You generally want to hit as many monsters as possible with your moves to battle efficiently.

Remember that there are two damage types!

Attack actions marked with the sword icon are physical damage, while ones marked with the star icon are magic damage. If you tap on an enemy at any point in time, you will see their remaining health and their resistances. Try to learn about each enemy so you know what type of damage to use!

Use your movement abilities to reposition enemies!

Your character does not participate in combat directly, but they can move enemies around with the aid of their movement abilities. Shown at the bottom left corner, movement abilities can be used once per turn for free, meaning it does not count down the enemy’s turn count.

Movement abilities will move enemies around as indicated by the pattern. Try to move enemies so that you can hit all of them with one attack! There is no limit to the amount of times you can move enemies, but remember only the first one is a free action – every movement ability after that will cause turn counts to go down!

Cycle out attacks for more options!

You can drag any of your attacks (or movement abilities) to the clear section at the bottom right corner, which will cycle out the attack in question for a new one. This takes a turn, but you may get better attack options.

If you have no favorable attacks out of your current selection, it may be more beneficial to sacrifice a turn to get a new attack rather than throw an effortless attack at the enemy. Choose wisely!

During the early game part of your adventure, you will be stuck with your two starting heroes Anton Oathbound and Arabella for quite some time.

Arabella deals a lot of damage to single targets and has a few AoE attacks, but she is VERY squishy with extremely low magic defense and physical defense. If she is attacked multiple times in a turn, she will lose a chunk of health.

One of Anton’s abilities is Provoke, which causes all enemies to target him for one turn while boosting the party’s physical and magic defense by 50%. This move is very important for Arabella’s survival.

If, during a turn where multiple enemies are on zero turn count, then that is a great time to use Provoke. Remember that it only lasts a single turn, so you need to use it right when monsters are about to attack. Careful usage of this ability is required to get through some of the early struggles.

As a side note, Anton also has an ability called Rise of Terracles, which attacks in a triangle-like formation. Using this ability makes the party take 20% reduced physical damage for one turn. If you do not have access to Provoke, this is a good substitute.

Equip gear on your character first!

The reason being is that, as you learned in the tutorial, the stat bonuses you get from gear is applied to all of your allies, whereas gear equipped to allies will benefit them only.

Train up your allies!

Your allies do not receive experience for triumphing through battles, only you do. To keep your allies sufficiently leveled up, you will need to use experience potions on them. You will find these as monster drops and level rewards.

Do not hang onto these – use them as soon as you get them. Dawn of the Dragons: Ascension has a rather steep difficulty spike, and you will not last long if your allies are underleveled.

Revisit past areas and 100% complete them!

It is okay to go from quest to quest, but doing so will bring you into areas that you might not be ready yet for. Always check the power level (PL) of the areas you are hanging around and see if your team is ready for it.

Since you probably still only have Anton and Arabella, we recommend revisiting the earlier levels and completing them fully. To complete a level fully, you must go through it multiple times and go down every possible path.

Completing a level fully will reward you with additional rewards, including gems, gold, and character medals, which are required for summoning new allies. You also gain more stat points to use for your own character as well.

Before you go too far into Northern Baird, we recommend replaying the levels in Central Baird. If you run through the levels enough and complete them 100%, you will have almost have the 50 medals needed to summon Chaddeus, a Gnome Wizard.

When you get your first third character, your party’s PL will go up drastically, so you should do this as soon as you can.

Join or create a guild for bonuses!

You can band together and complete the high-end raids with other players using a guild. When in a guild, you have easy access to join other players’ groups, and you even have access to the special Guild Shop where you can buy a random assortment of ally medals and gear (with a chance for rare gear) for the price of 5,000 gold.

Save your gems for character medals!

In the general shop, you can purchase a Premium Medal Bag that has 25-50 ally medals in it for 350 gems. For that same price, you can also buy the Premium Equipment Bag that has rare or better gear in it. There is also a special bag that focuses on specific allies which runs for 450 gems. This bag cycles out every few days.

If you ask us, we think character medals are the most precious thing in the game, because you can get gear through the level drops, but farming for ally medals takes a very long time.

If you are ever unsure of what to work towards next, simply take a look at your quest log and see what you have not done yet. As we mentioned, you will have to stop to grind out some more PL before you are able to go from quest-to-quest, but once you get some more allies on your team you can continue with them.

Quests reward you with stat points, lots of experience, gems, experience potions, and sometimes even ally medals. They are a great way to bolstering your resources, so complete all of them in a region before you move on.

That is our guide on Dawn of the Dragons: Ascension for now. If you have any other strategies to share with us, let us know in the comments below!