Dawn Break is a beautiful mobile RPG game that sees you face off incredible foes and sends you on impressive adventures. Complex and brilliant, this game is one that you will probably play for quite a while now. And we’re here to make the experience as enjoyable as possible by sharing a bunch of Dawn Break: The Flaming Emperor cheats and tips in our complete strategy guide.

Even though it doesn’t bring much in terms of innovation, there are some strategies that can be applied to perform better and features we must make sure that you know about. And even though this guide is mostly aimed at beginner players, more advanced ones might have a thing or two to learn, so why not go through it and see if that’s the case?

So let’s not waste a single second and instead let’s check out some Dawn Break tips and tricks below!

Collect all goodies daily
There are a lot of freebies that Dawn Break offers its players on a daily basis and you should make sure to collect them all in order to progress faster.

Complete missions, collect log in bonuses, check out the events… make sure that the first things you do once you log in to the game is to collect all these goodies. They quickly add up and help you get a lot further faster.

Level up the equipment often
One important thing that you can do in the game apart from leveling up your heroes (we’ll have more tricks on that below) is to level up your equipment and forge better equipment with similar items.

You upgrade your equipment by tapping on the piece you want to upgrade in your player’s menu, then use the required items for it. Since the upgrade items themselves are not very easy to get, you should always start working on the best / rarest equipment.

But leveling it up is not the only thing that you can do! If you have enough copies of the same type of equipment, you can spend some regular coins and forge a better one. 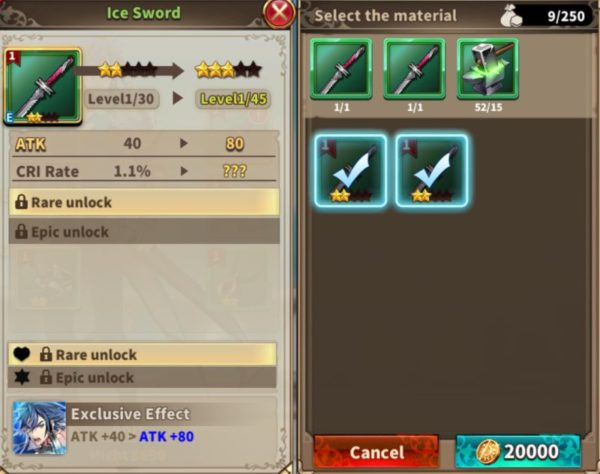 For example, two one star rings can be forged for a two star one with better stats. This goes on and on, so even the weaker equipment can get much better in the long run.

Auto battle is your friend
If you don’t have time to go through the battles yourself, you shouldn’t worry too much as the auto battle feature does a pretty good job when it comes to handling the regular missions. Even the auto battles are easily played by the auto battler, so you really can minimize your involvement if you so prefer.

However, there are some things that you should still pay attention to when the Auto Battle is going: first, you should know that the Fairies are not activated automatically, neither the special skill. You will have to manually activate those if needed.

Also, the game won’t automatically switch heroes – so if you have a weaker element, you will have to switch manually (or make sure you’re selecting a better element before starting the battle). These things don’t matter that much during the easy adventure battles, but you should still keep an eye on them just to make sure everything’s going according to plan. 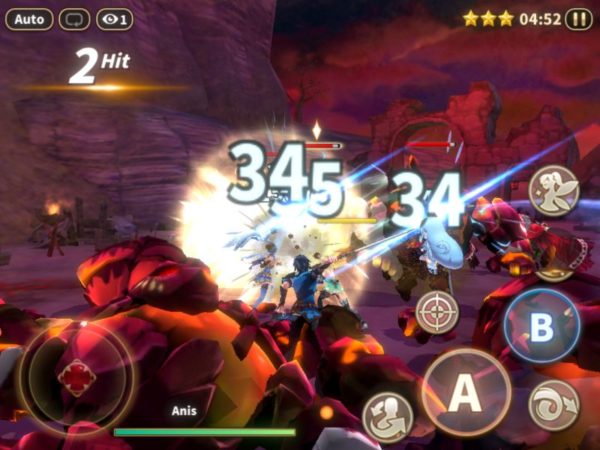 Auto complete all previously completed battles
Now this is a feature that I absolutely love: before starting a battle you have already completed, you can tick the box that instructs the game to auto play the battle over and over again. So all you have to do is to plug your charger and let the AI handle the rest.

This feature is extremely useful when you want to level up your heroes: it takes some time, but it will be done and since you don’t really need to do anything, it’s great. This saves you the leveling up potions for new heroes that you unlock and this way you can quickly get them into top shape when you unlock them. Really nice feature!

Also, this is useful if you want to farm for a specific item or try over and over again to get a hero shard. Just activate the auto complete and you’re set (as long as you have energy).

Alternately, with missions that you have already completed, you can insta-raid them without going to the battle itself. However, in this case, your heroes won’t gain any experience, but you will still win some XP potions along the way. If you have time though, it’s definitely better experience-wise to go through the battles themselves.

Go for the combos
If you prefer to do everything yourself, since that’s the fun way to play Dawn Break: The Flaming Emperor, then you should pay a lot of attention to combos. You activate them by combining 1, 2, 3 or 4 basic attacks with a B attack and each time the result is different.

The interesting thing is that the attacks themselves vary and sometimes a lower combo causes more damage (or at least more area damage) than a higher one. Make sure to check out all the combos and their effects to know which ones to use in battle.

Switch heroes for element bonus
Also make sure that you always keep an eye on the elements of the enemies. Each element is good against another and weak against a third, while Purple and Orange cancel each other out.

This is why it’s good to have heroes of various elements in your setup and always pay attention to this: you know the elements of the enemies before going into battle, so it’s not difficult to make the required changes in order to get the advantage.

How to change the camera view
In case you want to change the perspective a bit, don’t forget that you can do so: just tap the eye icon in the top left and you’re all set. There are 3 different angles you can choose and I personally prefer the second.

Add active friends for solid support heroes
Adding friends in the game is extremely important, just as it is joining an active guild. Friends can send you special tokens that you can use to get various items and goodies in the game. Make sure that you add them and don’t hesitate to remove those that are not active enough. Eventually, you will find both a solid, active guild and very active friends.

These would be our tips and tricks for fellow Dawn Break: The Flaming Emperor players. If you have even more strategies to share with the world, don’t hesitate to let us know by commenting below.