Crossy Road is back, and this time those goofy animals are storming a castle to take it back from the giant eagle! Crossy Road Castle is the newest entry into the Crossy Road series, and now the animals are going through a 2D platforming adventure. Jump, bounce, and dodge obstacles and see how far you can get!

The basic controls of Crossy Road Castle are pretty, well, basic! You move with the left and right arrows, and jump. You should know that jumping is affected by how long you hold down the button.

If you tap quickly, you will perform a short hop, but if you tap and hold the jump button, you will ascend higher than usual. There will be times where you need to do a quick short hop instead of a full jump, so get used to the timing.

Take your Time and Study the Room

Crossy Road Castle is procedurally generated, which means that the castle’s alyout will change with every run. The rooms themselves are preset meaning that eventually you will run into the same rooms, but you never know what order they will come in, so stay on your toes!

For your first run through you should approach each room with caution. When you first step into a new room, take a moment to examine your surroundings and see where all the obstacles and enemies are, then start moving. Moving too hastily can cause you to lose a life!

You do not have a time limit (kind of; more on that later) of any sort, so feel free to take as much time as you need in a room. Move cautiously and be ready to act!

There are certain rooms however that have giant angry blocks that will smash through the room. They are covered in spikes, so if you touch one of these things you will be a goner! In these instances, you have to think on the fly and run through the room. You will know if you are in one of these rooms if you see a wooden sign with an angry face on it at the beginning.

Grab the Coins and Tokens

Littered throughout the castle are shiny coins that are used as the game’s main currency. You should grab as many coins as you can, and be sure to bop any enemies you see as they will drop coins upon defeat.

You do not have to get ALL of the coins in a room, but it helps to get as many as you can. You can use the coins to help yourself through the castle, so they are extremely important to getting really far.

There is one more collectible you should look out for, and those are tokens. They are purple coins with a T in the middle of them, and they are usually hidden away somewhere in a room. Not all rooms have a token, but for the ones that do they are placed in tricky spots.

For example, the game loves to put tokens up in high places where you can only get to them by bouncing off of enemies. When you jump on an enemy, you get a small boost so that you can jump on enemies in rapid succession.

Watch out for the Enemies

There are two main enemies that live in the castle now. There are these little blue box guys who will roam around aimlessly. If you get close to them though, they will turn around and try to run into you. Just jump on them to get some coins!

The other enemy are baby blue eagles. They hover around or they can fly in a fixed pattern. They will not come after you directly, so do not worry about having to dodge them. But you should bounce on them anyways for some coins!

As a side note, when you bounce on an enemy and hold the jump button down, you will bounce higher than normal, so keep that in mind when you are bouncing around.

Every twenty levels you will come face to face with the giant eagle terrorizing the castle. You will be launched high into the sky where you will move up automatically. The giant eagle will be at the top of the screen and he will launch various attacks at you.

The main attack is to launch feathers at you. The feathers approach you at slow speeds, so study how they are moving and dodge accordingly. The patterns will change after the eagle finishes one pattern, so stay on your toes. You can graze past a feather safely, but do not get too close.

His second form of attacking is… laying a giant egg?! That is right – if you hang around the center of the screen for too long, the giant eagle will lay a spotted egg and send it straight down. It moves pretty slow, so just duck to the sides to dodge it.

After a while, you will catch up to the eagle and bump into him, making him fly back up to the top of the screen. You have to do this three times to beat the eagle, and then you are free to move onto the next room.

When you take a hit, you will lose a life and restart the room. If you lose all three hearts, it is game over and your run is over. If you need to take a breather, there is heart vending machine every ten levels. Pay 100 coins to restore a heart. Do this if you are going for the long run!

After a run, your final score will be tallied up depending on how far you got and the difficulty of the rooms you encountered. You will be awarded bonus coins and tokens if you got especially far.

You can use coins on the hat prize machine, which costs 1,000 coins per spin. You will unlock a random new hat to use so that you can make your animal friends fancy and funny.

The character prize machine costs 100 tokens, and this will unlock a brand new friend to play as. Collect lots of tokens so that you can grab them all!

Secret Rooms and the Hidden Gems

Some rooms may have alternate exits. If you see a green exit door, go through that – it is a secret room! If a room seems especially spacious, it may be hiding a secret room, so be sure to explore.

In secret rooms, there will usually be loads of coins for you to collect, but most importantly there is a green gem hidden somewhere in the room. If you grab it, you will add it to your collection. There are a total of five gems to collect from the castle.

Be careful in these rooms, as they often contain do-or-die moments meaning you get one shot at the gem. If you mess up, you will have to wait until your next run! If you manage to collect them all, you will unlock a special Prince character to play as.

More Castles in the Future

As of now, Crossy Road Castle only has one castle for you to play through. It is endless, so the game will go on as long as you want it to, but the next castle is still in development. Be sure to revisit at a later date to play more!

That is all for our guide on Crossy Road Castle. If you have any other tips or tricks to share, let us know in the comments below! 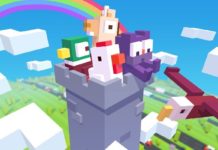 Crossy Road Castle Guide: Where to Find All Bonus Rooms