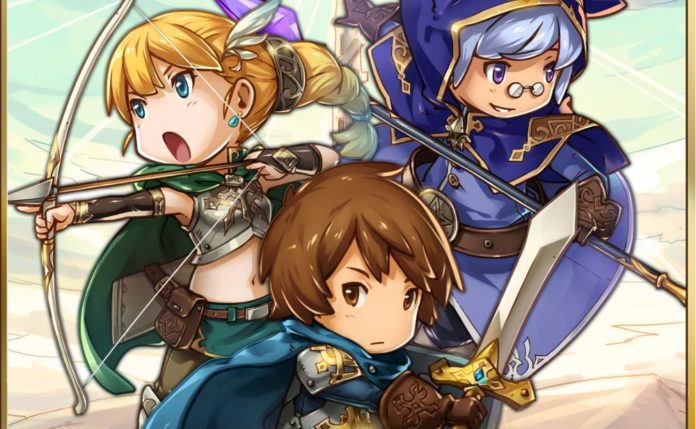 Crazy Defense Heroes is a brand new tower defense game for mobile, one that mixes traditional elements with RPG and card collecting mechanics. In other words, a great game that we’re going to talk about in today’s strategy guide where we’ll be sharing everything you need to know in terms of Crazy Defense Heroes cheats and tips in order to master all levels.

There are many things to consider when it comes to strategy and how to play this game, and we’re doing our best to cover them all in today’s article. This is a fun, addictive game that you certainly love and want to get better at. So let’s just do that and let’s check out some Crazy Defense Heroes tips and tricks below!

Scavenge like crazy
You need a lot of resources in order to upgrade your towers, heroes, spells and your avatar’s items. Fortunately, that becomes a bit easier if you start scavenging – and you should do that as often as possible.

In order to Scavenge, you will need to go to the starting screen in the game and tap the Scavenge button. Depending on the number of missions you have already completed, you will have more or less options available. Try them all and never let any energy go to waste: scavenge instead, because you will need those resources! 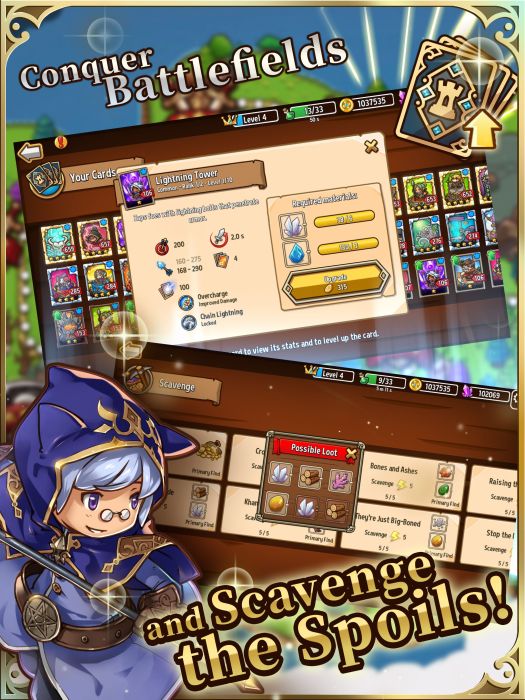 Getting new cards in Crazy Defense Heroes is pretty difficult, so increasing your chances of getting something new and good increases as you complete the missions and collect from the chests, so always focus your gameplay on completing those missions first!

Upgrade your Tower Cards first
There are various types of cards that you can collect: tower cards, spells, other heroes and equipment for your main avatar. Although you will have to upgrade them all in order to remain competitive, you should focus the most on upgrading your tower cards, mainly those cards that you constantly use in battle.

The towers are your main items during the missions and having them as powerful as possible is extremely important. Also, as you upgrade these cards, they will rank up when they reach a specific level, which in return gives you more upgrade options during the battles. So this is why upgrading the tower cards is the most important thing to do in the game.

But what tower cards to upgrade? You shouldn’t wait too long for new cards, as you will get them rarely. Instead, focus on the tower you like the most and you’ll most likely use at all times (like the basic archer tower or an area damage tower like the bomber) and get those to the maximum level.

I haven’t had a level yet where I felt that I should’ve had a different tower with me, so the game is pretty balanced in this area, no matter what cards you have. Just focus on your towers, then work on your other hero and avatar. 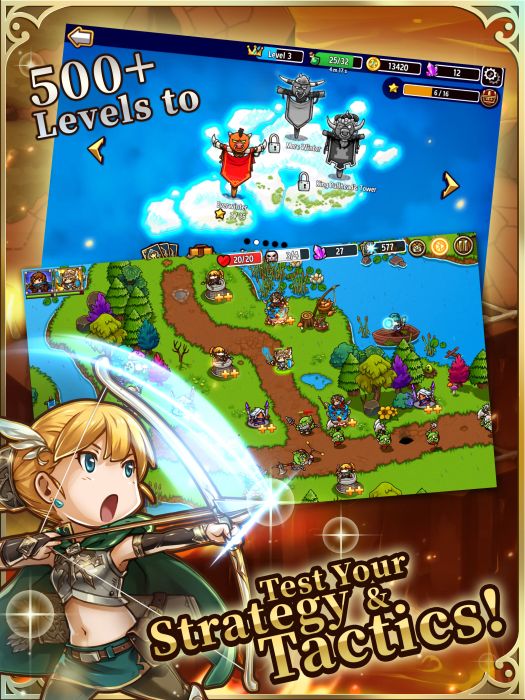 Your avatar vs other heroes
Your main avatar will always go into battle, but there are other heroes that you can take with you as well. My recommendation is to always take one additional hero in battle, since the spots for placing towers are limited and an additional hero is great for taking out enemies or slowing them down for the towers to take them out.

Upgrading a hero is also a lot easier and cheaper than upgrading your main avatar, since the latter is upgraded by leveling up each piece of equipment individually, while the former only requires an upgrade for all the stats.

However, you shouldn’t focus too much on upgrading the hero you’re taking into battle as they usually can last for the entire duration of the battle with just a few upgrades. They cause a lot of damage by default and, if you learn to position them at the right spots, they will really make a difference.

Play and replay levels
In case you don’t manage to get the three stars from the first go – which is going to happen more and more often as the levels become more difficult, try replaying the mission immediately after completing, but change your strategy a bit.

In most cases, it’s matter of tower placement in order to get the three stars. So when you start the mission again, simply change the way you position your towers, based on what you’ve learned during your first run. Now that you know what enemies are coming – and where they’re coming from – it’s a lot easier to plan your strategy and act accordingly.

Tips for winning your battles
Apart from the things that we’ve mentioned above, which all help you win each battle and get the 3 stars required to master it, here are some additional tips and tricks:

– I suggest to always start a fight using one spell, one additional hero and the rest – towers.

– Don’t use the spell too often as it’s the least cost-effective card in the game (one use). When going with a spell, I recommend choosing something that deals a lot of damage to multiple enemies, in order to get the most for your mana.

– Always try to call the troops early for the mana boost. This helps you place more towers and/or upgrade them faster, which in return means that you’ll do a lot better in battles.

– It’s usually all about placing your towers at the right spots. So try to follow some simple rules, like placing towers in spots where they cover the biggest possible area, making them more effective (have upgrades in mind here as well). Place area of effect towers in spots where you estimate troops to pile up – either close to where you’ll keep your heroes or closer to the entry points of the enemies. Finally, Try to keep a solid balance between placing new towers and upgrading them, keeping them varied and effective.

– Usually, early on in the mission, it’s best to have fewer towers, but upgraded, instead of placing a ton of towers that are not upgraded. You will also get to see where the enemies are coming from, what your weak spots are and place new towers to counter-balance that afterwards

– For the more difficult levels, try to have two areas of focus: have some towers early on for causing damage (eventually damage over time) and a different area towards the exit points, where you should focus your heroes to hold down the remaining enemies and have solid towers there to take them down. This also allows you to call enemies early without creating huge piles near the entrance, making it easier overall to beat the missions.

These would be, for now, our Crazy Defense Heroes tips and tricks. I’m sure that there are many other things to consider when playing the game, so if you feel that we’ve missed something, let us know by posting a comment below. 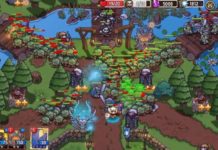 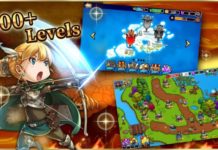