The city awaits their packages, and you have only a few seconds to make the delivery. What do you do? Rocket yourself off a mountain, that’s what! Crash Delivery is an arcade delivery game where you launch your delivery truck with as much power as possible to reach the city. Gain coins, and spend them on upgrades to launch your truck even further!

In Touch Tap Play’s Crash Delivery tips and tricks guide, we will go over the basics of launching and how to get far. We will also talk about to earn lots of coins so you can get upgrades faster, so let’s get started with our Crash Delivery cheats, tips, and tricks strategy guide to complete all deliveries!

At the start of every run, your truck will start out on a small hill. Tap and hold the screen to start accelerating, and you should hold it down all the way to build up as much speed as possible. Once you start seeing speed marks around the edges of the screen, you have built up lots of speed!

Once you have achieved lift off, you can continue holding down the screen to start using your rocket boosters. You have a limited amount of fuel, so use it wisely. Rocket boosters can be used to help propel your starting launch even further, or it can be saved and used later.

The starting launch is probably the most important part of the launch, so you want to make sure you have full power. Use rocket boosts to give yourself a bit of lift, and watch your truck soar through the air!

As your truck comes tumbling down through the air and you are out of fuel, you will roll around on the ground until you come to a complete stop. When you are fully stopped, the run is considered over and the game will tally up your performance.

You are given coins based on two scoring factors: earned coins and extra money. Earned coins are the coins you actually get during the run. These are coins earned by performing tricks in mid-air like barrel rolls and flips, and they are also earned by destroying objects like trees and houses.

The more destruction you cause, the more coins you will earn. While you really do not have any control over your trajectory after you launch and run out of fuel, try your best to hit as many things as possible.

The second factor is extra money. This is simple bonus money that is added onto your earned coins, and the amount added is on is dependent on how high level your Extra Money upgrade is. The more you level it, the more extra money you will earn.

At the end of each run, you can also optionally watch an advertisement to double your earnings. This is not particularly helpful for low earnings, but if you do a really good run it might be worth it to watch the ad.

You have three truck upgrades to choose from: speed, fuel, and extra money.

Speed determines how fast your truck can accelerate and the top speed it can reach. This is probably the most important upgrade to invest in.

Fuel determines how big your fuel capacity is at the start of a run. Upgrading this can help you start out with a stronger boost, or it can get you out of sticky situations later on during the run.

Extra money will determine how much bonus money you get after a run. The better you do in the run, the more extra money you will receive. Upgrading will increase the amount of money you get.

As you can see, all three upgrades are equally important so you upgrading them evenly. You can progress faster if you just stick to speed and fuel, but eventually you will be making little money from each money due to neglecting the Extra Money upgrade.

Progressing through the Campaign

You will start the game out in Green Hill, the first level. Green Hill, as the name implies, is a beautiful yet steep hill overlooking a city. The city is 500 meters away from your starting point, and your objective is to reach the city.

The core gameplay loop is launching yourself and getting as far as possible, earning coins, and then using those coins to purchase upgrades that allow you get even farther. When you finally reach the 500m mark and enter the city, you will be able to move onto the next level.

Along the way, each level has unlock points at specific distance intervals. When you reach a certain distance, you will unlock a new skin for your truck.

When you do unlock a new skin, the game will randomly choose a skin to unlock. You do not get to pick your own, unfortunately, but the new skins are pretty cool to play with.

You will notice that the skins can be radically different. For example, you can turn your heavy delivery truck into a slim sports car. While it looks completely different, this does not seem to actually affect the weight and speed of your vehicle, so you can choose based on looks if you want.

One thing to note is that your collision hitbox seems to be the only thing that changes. Bulky vehicles like your starting truck and the heavy duty trucks will have an easier time hitting objects since they are much bulkier.

If you are looking to cause as much destruction as possible, try picking the heaviest looking skin and wreck the world!

For the first few levels of fuel, you will only have enough fuel for about a second or two of boost time. Using this boost time wisely is the key to getting far distances!

When in doubt, it is usually the better idea to use all of your boost as you are coming off the starting ramp. This will ensure that you gain as much altitude and speed as possible, which will make your descent cover much more ground.

Alternatively, you can use a little bit of boost at beginning and hang onto some to use in a pinch. If you run into something heavy and your run comes to an abrupt end, you can use your left over boost to give yourself a kick back into the race.

Of course, you will actually need a substantial amount of fuel leftover to pull this off effectively. This basically means that you will not be able to do this until your fuel is at around at least level 15.

Crash Delivery is a pretty straightforward game. Even if you feel like you are not making progress, you definitely are by simply playing the game. Completing runs, no matter how short they seem, will always net you coins.

More coins means more upgrades, which means longer flight times! Just keep at it and eventually you will be able to complete all deliveries with no problems.

That’s all for Crash Delivery! If you have any other tips or tricks to share, let us know in the comments below! 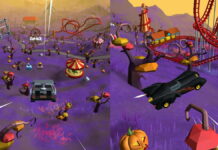 Crash Delivery: How to Beat the Halloween Event | Tips and Cheats