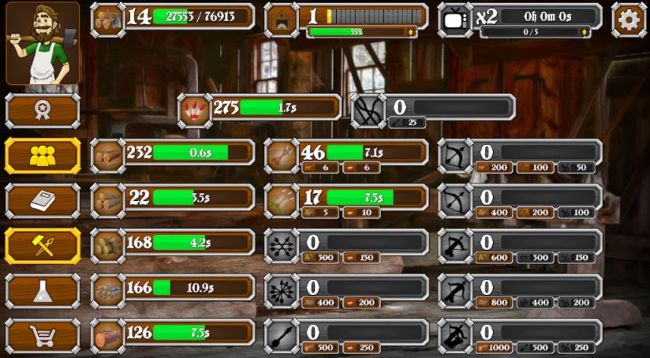 In today’s article we are going to take a look at all of the Craftsmith tips and cheats that we have for you and help you become a skilled craftsman who makes all kinds of tools and items.

This is a very relaxing game which will definitely keep you casually playing and making upgrades. If you like games where you get to manage various tasks, without anything else pretty much to entertain you in the meantime, then this is the perfect choice. Plain, simple and easy – Craftsmith!

So without further ado, let’s dive right into the Craftsmith tips and tricks to help you develop everything faster and more efficient than ever before! Are you ready? Then let’s get started!

Do thing manually until you automatize everything

At the beginning you will have to tap manually on each wood and other items that you have unlocked to start producing them 1 by 1, until you’ve unlocked automatization. That is, once you reached 5 items in that field.

Basically as soon as you have unlocked one item in the list, you will have to tap on it to start producing. Do that 5 times, because once you have 5 of that item you can head on to the Workers tab (the one with 3 human figures icon) and you can start to make things automatic, so you won’t have to tap on them.

This is very important because once you have too many items you won’t be able to keep up, so it is much better and simpler to keep things automatic! I suggest that you make this your number 1 priority because it will make things much better for you in the long run.

The more you produce, the more workers you can hire

When you are in the Workers tab after you’ve automated everything you will see some numbers which shows you the amount of wood necessary (assuming you are in the wood stage – if you are in another, then you probably already know this) to hire another worker.

I suggest that you keep saving up to hire more, because the more you hire, the more will increase the amount of wood produced and the power. So by all means, it’s a good investment to spend your wood on hiring more Workers.

You got the workers, now train them!

It is important to train the workers – probably more important than having more workers (or arguably as important). That is, because by training them you reduce the amount of time they need to produce. This is the third tab, the one with a book icon. Head on there and always try to make the highest upgrades possible because they are going to speed up the entire process.

These workers training upgrades decrease the time required to craft objects, thus increasing speed. The upgrades are more expensive than others, but rightfully so because they are very important. So in order to make them, you need quite a bit of patience.

I suggest that you save up enough wood to upgrade these as much as possible for your current wood capacity, then move on to upgrading the Workers (increasing the Workers number) because it will be a lot easier. This at least worked very well for me, as the speed bonus was quite big.

Increase the Storehouse as much as possible

The Storehouse is located in the upper-middle side of the screen, and it basically decides how much wood you can store up. This Storehouse will increase the stashed wood amount for each object, so it’s super important to upgrade it if you want to unlock that next Training upgrade which requires 200 in each wood type (and other objects too, but still using wood as an example).

When you have made all the possible upgrades to each of the wood sections you have, I suggest that you start donating the wood here. With each upgrade that you make, it will be easier to unlock more stuff, because the more your stash increases, the better it will be for upgrades in the long run (at least before you Prestige).

Watch ads to get EXP Boosts

One of the best things you can do in the game to get some boosts to all of the objects is to watch an ad and that is going to give you 2x EXP to all of the items! It’s an option located in the top right corner of the screen, and I really suggest that you watch an ad to get it activated ASAP.

You can watch a total of 5 ads and add up to have several hours of 2x EXP, so if you are going away / offline for some time, then it’s better to have this activated because it will make a big difference.

When your production will start going slow and you want to benefit from some permanent boosts, then it’s time to Prestige. The more you wait and advance at the beginning, the better it will be when you do decide to Prestige in the end.

I suggest that early on you don’t go for the blue stats, as they are for later on (and once you’ve gained a little bit more experience so that you can decide what stats you want to boost first, but if you really want to choose, then I recommend “Experienced Traders” first), and instead you focus on the normal ones. Try boosting these several times, starting with:

– Stockpiled Wood (this should be first as this will increase the Stash by 20% first, then 40% and so on, so it’s super useful for unlocking more upgrades quicker).

– Swift Wood Gathering (I suggest this as second because speed is always good, so it’s an overall great stat to have no matter the situation).

– Experienced Lumberjack (This should be third or even second depending on the situation – it increases the EXP gained from Wood).

The rest you can decide depending on how you play, but as a first stat I really think that Stockpiled Wood will make a great choice because it increases the stash by quite a bit.

These would be all of our Craftsmith tips and tricks that we have for you right now. Do you know some more useful game tips and strategies that you would like to share with the rest of us? Feel free to leave them down in the comments section below!