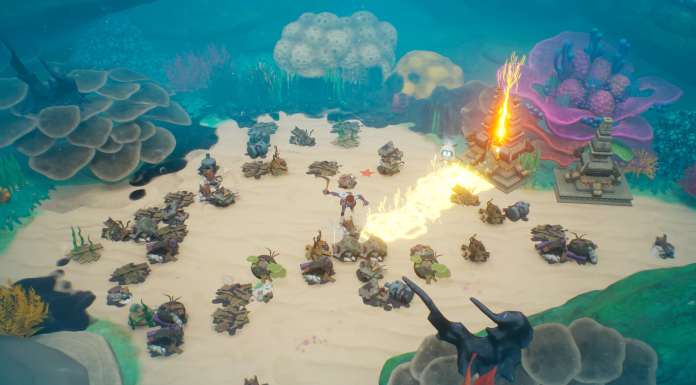 Coral Island is a brand-new farming simulator game with a tropical twist. Raise a farm from the ground up, get to know the locals, and when you need to cool off, why not go for a dive into the beautiful coral seas? Even though it’s in early access, the game has plenty of mysteries to solve, including the music clam in the ocean. Today, we’ll detail everything in our Coral Island diving music puzzle guide!

If you’ve been playing Coral Island since its open early access period started, then you’ve probably realized that one of its unique features is the ability to dive. Farming simulators are becoming more popular nowadays, and Coral Island sets itself apart from the rest by giving players underwater freedom.

We’ve been exploring underwater for some time now, much like the rest of you, and we’ve come across a mysterious clam statue. In front of the clam are little pedestals that make sounds when you go over them, indicating what could possibly be a music puzzle.

Related | How to Donate to the Museum in Coral Island

We searched the immediate area for any clues, but quickly became stumped. We went through online discussion forums to see what other players had to say about this clam, but it seems like everyone came to the same conclusion: This is a puzzle that isn’t fully implemented into the game yet.

That basically means that the diving music puzzle is a non-functional puzzle, at least for now. We’re expecting this puzzle to be related to the Merfolk we met earlier, and maybe we’ll learn of an important song or tune we have to repeat on these pedestals.

So, keep an eye out for a future update that expands on this puzzle some more. As of writing, this puzzle is basically unsolvable until we get more clues. We’ll update this guide accordingly when the time comes.

Do you have any ideas what this clam statue is used for? What theories do you have about the music? Let us know in the comments below!