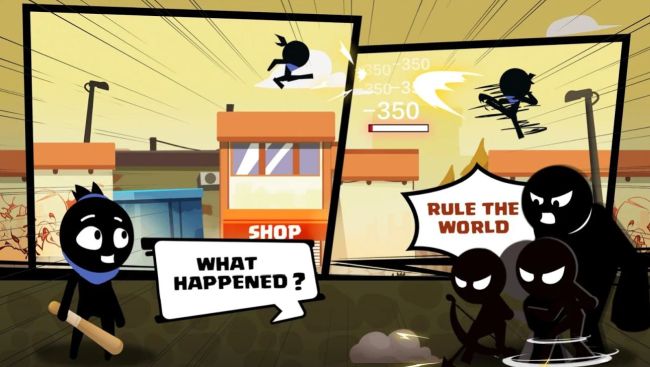 In today’s article we are going to dive into the Combat of Hero tips and cheats to help you get stronger and defeat more opponents, as well as pick all the right boosts for your hero!

This is a terribly addictive game, and if you love simple yet fun games with just the basics down (such as simple graphics, controls and mechanics that don’t require a manual) then you will enjoy Combat of Hero as much as I did, guaranteed.

But enough fun and games – you are here to learn all of the Combat of Hero tips and tricks that we know, so let’s not waste another moment and dive right into them!

Focus on passing the first 30 stages

This should be your very first goal in the game. Once you passed these first 30 stages you will be ready for the next ones which will give you some extra boosts and allow you to equip gears such as weapon, helmet and more (but we will detail more about gear down below).

From these first 30 stages you will not receive anything but Gold, which is used for various upgrades. I suggest that you pass them as fast as possible so that you can get into the more interesting stuff later on!

All that you should do in my opinion is acquire as many buffs as you can until you have more than 112 ATK, more than 716 HP and more than 34 Defense, as these are the recommended stats for the first chapter / stage. Now I personally didn’t have 34 DEF, and it worked out good for me, but it’s up to you what stats you want to upgrade.

Do that and then play the levels until you have unlocked the next chapter! That’s when equipment will unlock.

After passing the stages you will sometimes receive 3 options out of which you can only select one. These are permanent buffs for that stage, which apply for as long as you are alive and playing the stage continuously (without restarting it).

There are several buffs that you can acquire, but you are the one tasked to pick them after the stages. There can be some which are going to help you be more tanky, others which will boost your Crit Damage, others which will increase your attacks and even buffs which will allow you to auto battle.

Here I will list a few of the buffs which I consider to be the best, so whenever you get a chance to pick them, you should do so because it will be truly helpful.

The best buffs in Combat of Hero

– Power Boost (Great) – this buff will increase your ATK by a higher amount than the Power Boost (Basic). Never pick the Basic one, only the Great one! Pay really close attention to that Great and Basic difference because while the Basic one gives you some ATK, the Great one will give you more than double what the Basic does. So it’s only worth picking that.

– Auto Battle – this buff can be turned on and off as you wish – it can be both good and bad, but if you want to pass more levels without much hassle, then don’t rely solely on Auto Battle.

Auto Battle is great when you have a lot of HP Regen / Lifesteal because it won’t dodge the red areas by default, and you might end up getting hit by the most basic and easy to dodge attacks.

I suggest that you pick this one, have it turned on but assist it when it comes to dodging incoming attacks because otherwise it’s useless.

One which recovers X amounts of HP at once, with a 30s cooldown

One which recovers X amounts of HP for a few seconds, every second with a 30s cooldown.

Both of them are good, but try the first one first as it’s more reliable in my opinion. Of course, you can have both of them at the same time but the only difference it will make is that it will make Auto Battle much easier.

– Overwhelming Force – this buff will deal damage to all enemies in front every 1 attack. It’s a good attack boost because it will make all of your basic hits AoE pretty much. Combine that with lots of Crit and Lifestealing buffs and it’s one of the best you could have.

– Remote Strike – very similar to Overwhelming Force, it will attack only one extra enemy Forward. It is helpful in every situation.

– Critical Strike – this buff gives you a chance deal a high amount of damage. There are two types of Critical Strike buffs: one which shows you the % and another which tells you “slim chance”.

Keep in mind that the one with the “slim chance” is not as slim as they let you believe, because by testing it, I could say it’s about 5-15% and it hits quite often. The other one which shows you the % is almost always 50%, so it’s basically half of your attacks! Try acquiring them both if possible.

– Lifestealing – this buff will give you a chance to steal X amounts of HP which help you survive without having to get Rejuvenation buffs, only by attacking enemies. It is super useful, so try to get it all the time as it’s going to make it much easier to survive.

– *(Optional)* HP Increase – this will give you some flat extra HP which can help when it comes to tanking more. It’s a good buff because if you have more health, you can tank more and thus you’ll survive more.

Sometimes you will get a pop up which offers you the chance to get the selected buff twice, in exchange for watching an advertisement. I suggest that you do that all the time, as it’s going to matter a lot.

Imagine if you get a buff like Power Boost (Great) which gives you +150 ATK – if you watch an advertisement and take up on the offer, it will double and give you +300 ATK. That will definitely make for a big difference. So don’t skip on it, because it won’t appear all the time!

When you find Smithy, accept the gifts

Sometimes during the chapter battles you will encounter a new pop up on your screen. That is the Smithy, which gives you a chance to enchant equipment once every 10 stages. It’s a very lucky encounter, which will make you stronger by either making your attacker deadlier, or your defense higher!

I suggest that you accept one of the ones which you need the most depending on your currently selected attributes, because since every stage gives you different rewards, you should build according to what you need the most in order to pass the stages easier!

You have one free revive – use it wisely

During the battles it might happen to die and if it happens at one of the higher levels while you have good progress, then it’s really going to be a big inconvenience. I suggest that when you die at a high level, you immediately choose to watch an advertisement and revive instantly.

The moment that you die and don’t revive, you lose all progress and will have to start over in that chapter from stage 1. Because you need to reach stage 30 in order to pass a chapter, then it’s good to try and survive for as much as possible every time!

If you died at an early stage (lower than stage 15) then I suggest that you don’t waste the ad to revive and instead start all over. It’s relatively easy to pass up to stage 15 with the right buffs, so don’t waste the ad before that.

Equip and upgrade your gear

In the Equipment tab you will see your character along with all the possible equipment it can have. I suggest that if you have enough fragments that you should craft the gear that you need, because the higher stages drop better equipment.

Also, don’t forget to upgrade the gear because it will be a really big help. Always start with your weapon because that one gives you increased damage, which is a must in every stage. Then, you can upgrade the piece which gives you the stats that you need the most depending on your play style.

In order to upgrade the gear you only need Gold, so keep on farming and farming and soon enough you’ll get some powerful items!

In the Inner Power tab you will have the possibility to train your attributes. They will give you basic damage and HP increased, permanently, so all you need is Gold. Make sure that you upgrade these before you spend all the Gold on equipment because these are permanent and super useful!

These would be all of our Combat of Hero tips and tricks that we have for you right now! Do you know some more useful game tips and strategies that you would like to share with the rest of us? Feel free to drop them down in the comments section below to be shared with everybody!