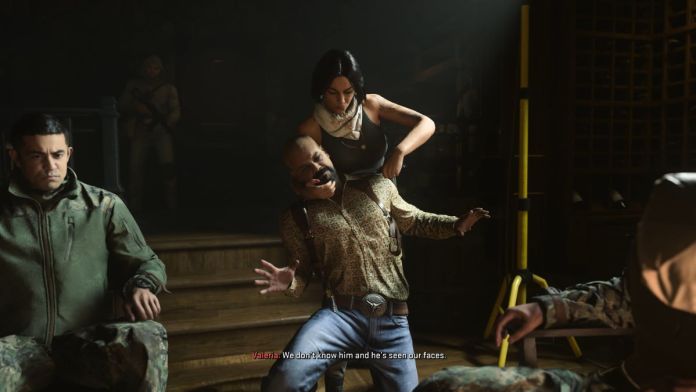 Call of Duty: Modern Warfare II is no stranger to heavily cinematic missions and situations. Mission 11, “El Sin Nombre,” has players take control of Soap as he enters the hideout of the notorious El Sin Nombre. A direct confrontation is very bold, but that’s part of the plan. As Soap, you’ll need to make sure to answer all the questions correctly during the interrogation. Today, we’ll show you all Valeria interrogation answers and outcomes in COD: MW2!

In mission 11, Soap willingly gives himself up to get into El Sin Nombre’s hideout. As he’s being escorted, he somehow manages to run into Alejandro, who tells him everything he needs to know in order to survive the upcoming interrogation.

Pay attention during the elevator scene, as Alejandro literally tells you all the correct answers needed for the interrogation. Once the elevator stops, you’ll meet with Diego, one of the henchmen. He’ll take you to a woman named Valeria, who forces you into an interrogation chair.

For each question, we’ll list all the possible answers, and bold the correct choice. Picking the right answer will move you to the next the question, but the wrong answers will have some unique dialogue.

If you’re curious, you can actually get away with one wrong answer. Picking a wrong answer will usually result in Valeria asking you if you’re sure—as if she already knew the right answer—and you can change your answer if you wish.

There are a variety of unique branching dialogue paths and outcomes, depending on which answers you pick and when, even if they’re the wrong ones. For the curious, here are all the ones we’ve found.

First Question: “Hmm. Your turn, blanquito. Who attacked us?”

For the very first question, Valeria will ask who attack her group. You can simply sit there and say nothing, letting the green timer bar run out. Valeria will warn you that if you’ll die if you do not answer, so let the timer run out again, and she’ll keep her promise! Your possible answers here are:

Saying it was the cartel will immediately end in death, as Valeria will say that her group examined the bodies and recognized none of them.

You can still save yourself by selecting the Mexican Special Forces for the second answer. This will result in a pistol whip to the face, but you’ll move onto the second question nonetheless.

Second Question: “There were outsiders helping the Mexican Special Forces… Who were they?”

Now, Valeria demands to know the identity of the outside party who ambushed her group. You can once again let the timer run out twice to let Valeria shoot you on the spot. Your possible answers here are:

Picking their competitors will make Valeria scoff at you. You’re given a second chance to answer, and you can double down on the competitors answer, and Valeria will see through your lies.

Just like the first question, you can switch up your second answer on either dialogue tree to save yourself, as long as you pick American PMCs.

Third Question: “Who leads Shadow Company? Give me a name.”

Now that Valeria knows a second group was involved, she demands the name of the leader of Shadow Company. Once again, you can wait out the timer twice to get a bullet to the face. Here are the list of names:

Picking Alejandro Vargas will make Valeria ask if you’re sure. Picking him again will reveal that Colonel Vargas actually leads the Los Vaqueros, resulting in your death.

Choosing Ghost will make Valeria demand a name, not a call sign. Selecting Ghost once more will frustrate Valeria and cause her to shoot.

There’s an interesting scenario here if you pick one of these two names and then pick the other one immediately after. Valeria will suspect that you have no idea who attacked or that you’re trying to protect them, resulting in your death.

Fourth Question: “This man… Graves… What does he want?”

With the identity of the leader revealed, Valeria needs to know his motive. This question is unique in that all answers are actually correct. They are as follows:

No matter what option you pick, Valeria will cut you loose and Diego executes Nunez, as you ended up being the most useful to them. You’re given the option to get out of the chair, but if you sit completely still for a while, Diego will just lock you in the room, and you’ll fail the mission.

You can also fail the mission when you’re in the hallway being escorted by Diego and the guard. Once you get to the elevator where Valeria is, you can simply stand outside. Valeria will think you’re getting cold feet, so you get locked up for dawdling.

Once you enter the elevator proper, it will conclude the entire interrogation scene. What did you think of all the different ways this scene could play out? It’s pretty interesting to take a break from all the shooting and have a super serious scene play out!

That concludes our COD: MW2 guide on all Valeria interrogation answers and outcomes. Is there an outcome that we may have possibly missed? Let us know in the comments below!