Home Guides COD Mobile Season 10: How to unlock the CBR4? 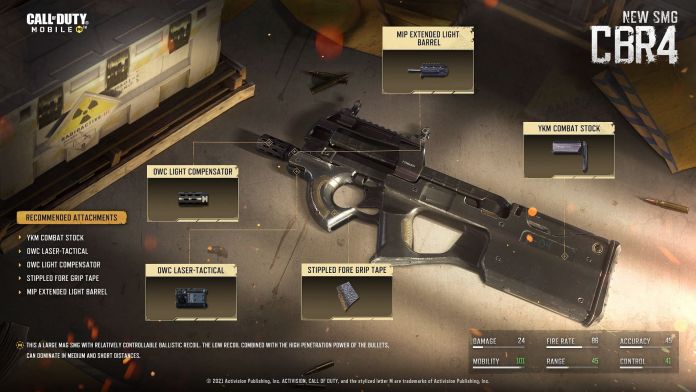 Call of Duty Mobile Season 10 is finally here and just like every other new Season, COD Mobile Season 10 packs in a ton of new content. With Season 10, there’s a brand new Battle Pass that includes free and premium items like new Operators, Weapon Blueprints, COD Points (CP), and more. The developers have even introduced a reimagined version of P90 from the Modern Warfare titles.

The weapon is called the CBR4 in COD Mobile Season 10 and can only be unlocked from a Seasonal challenge. The CBR4 is not the only weapon coming with Season 10. In an unprecedented move, Activision has released three new weapons at the same time in one season. The second weapon is the SBD sniper rifle, while the third is the Nunchuk melee weapon. This article will guide you on how you can get the CBR4 in COD Mobile Season 10.

How to unlock CBR4 in COD Mobile Season 10

The CBR4 can be unlocked by completing the CBR4 Seasonal Challenges in COD Mobile Season 10. In the main lobby, you will find all the missions related to unlocking the SMG under the Seasonal Challenges tag “CBR4 Supremacy.” These missions are fairly simple and can be completed in a single gaming session with friends or solo.

Given below is the list of all the missions needed to be completed to unlock the CBR4 in COD Mobile Season 10:

Once you have performed all the required missions, you will also be awarded the M21 EBR Green Marble weapon camo.

COD Mobile Season 10: How to unlock the CBR4?