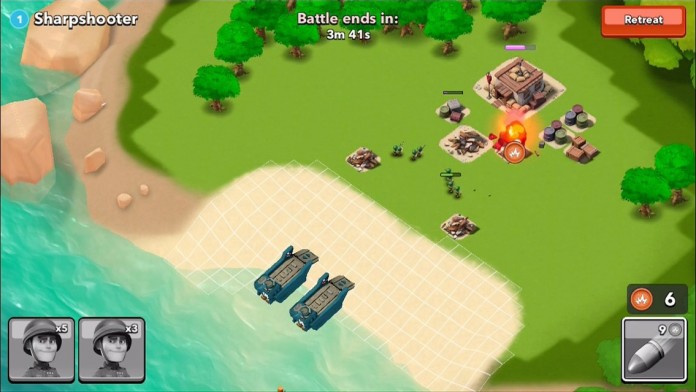 The latest game developed by Supercell is going to be released in just a few hours on the App Store. Ladies and Gentlemen, get your rifles ready, as Boom Beach will finally become available on the App Store tomorrow.

Boom Beach, developed by Supercell, is a free to play game strategy game that’s not too different from Clash Of Clans. You will be controlling the game from a top down view while you build your base, recruit troops, defend against enemy attacks and plan your own attacks against the enemies. When deciding to attack enemies, you can chose between player or computer controlled islands.

Unlike Clash Of Clans, Boom Beach is a colorful game set on tropical islands. For thisreason, you will be able to initiate attacks by sending landing crafts and start your attacks from the beaches of different islands. The ships aren’t just for transportation as you will be able to use artillery to aid your troops’ assault.

As you can see, the game sports quite a lot of similarities with Clash Of Clans. This fact, however, will not surprise anyone, especially considering how popular the game is. If you’re looking for a similar gameplay experience with a change of scenery, consider taking a look at the game.

Boom Beach lunches on the App Store tomorrow. The title will be a free to play game.