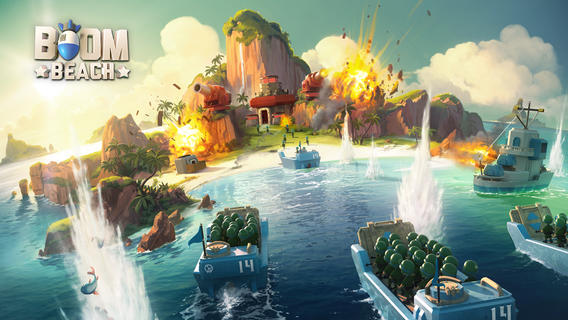 Clash Of Clans is probably one of the most influential iOS titles released in recent times. Ever since it was officially launched, multiple similar games have also been released, heavily inspired by its basic gameplay mechanics.

Among the Clash Of Clans clones recently released there is a game that’s quite remarkable, as it’s been created by the team behind the real Clash Of Clans.

Boom Beach, developed by Supercell, is a free to play game strategy game that’s not too different from Clash Of Clans. You will be controlling the game from a top down view while you build your base, recruit troops, defend against enemy attacks and plan your own attacks against the enemies. When deciding to attack enemies, you can chose between player or computer controlled islands.

Unlike Clash Of Clans, Boom Beach is a colorful game set on tropical islands. For this reason, you will be able to initiate attacks by sending landing crafts and start your attacks from the beaches of different islands. The ships aren’t just for transportation as you will be able to use artillery to aid your troops’ assault.

If this sounds quite interesting to you and have access to the Canadian App Store, you will be able to try the game out right now, as it’s been released over the weekend. All the other regional stores still lack the game but it will surely be released soon.

We will let you know once the game becomes available everywhere else. In the meantime you can check out a gameplay video right below.