Home Mobile Gaming News Claim Your Territory as a Dog in Bark Park, a Multiplayer Dog...

What a beautiful day to hit the park and go for a stroll! It is time to make the rounds and claim your territory, because everyone else has to know that the park belongs to you! Wait, what is this? There are other parks claiming YOUR territory? This cannot stand!

And thus begins the eternal conflict of dog territory in Bark Park, a new competitive multiplayer dog game for iOS. Despite the wacky concept, Bark Park is a seriously competitive game where you can duke it out with your friends locally or over the internet to see who can claim the most territory.

Each dog will start off in a random part of the park. They will need to find a place to drink some clean water, then with a full tank they can start claiming some territory. Run around the park and find some trees – the dog with the most trees claimed when time runs out wins!

Of course, the opposing dogs are not just gonna let you take their territory! Use power ups to stun the other dogs and distract them from the true goal! Winning nets you prize money that you can use to unlock new dogs, costumes, and more!

Bark Park is available now on the App Store. 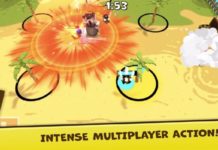