If the success of Angry Birds has proved anything, it’s that there’s a lot of entertainment value in propelling a flightless bird through the air. Developer Slidesoft hopes to capitalise on this immutable fact with ChickenPOP!, a game about making a chicken fly against its will.

The aim in this case is to send a chicken upwards, using a cannon to get it off the ground and then a series of bubbles that you create with taps of your finger to keep it bouncing towards heaven.

ChickenPOP! is a physics-based casual game, so the placement of these bubbles is crucial. Generally you want your chicken to land right at the top of the curve, so that it bounces in a nice predictable vertical way. 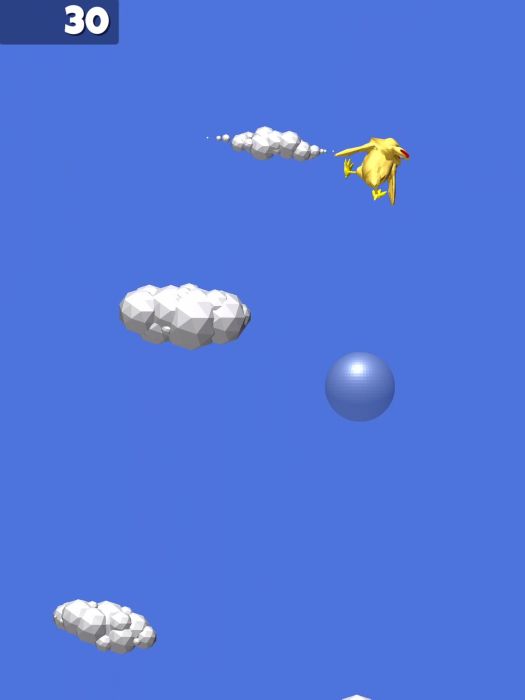 But sometimes you need to adjust the angle to dodge or attack a pesky obstacle. There are bees that pop your bubbles with their stings, birds that generally get in the way, and drones that follow you around.

Sometimes you just get the placement of your bubble wrong and your chicken caroms haphazardly to the side and starts plummeting to the ground. Once this happens, you have almost no chance of recovering.

As you can probably tell, ChickenPOP! is a fairly challenging game. Even without the obstacles it’s tough keeping your chicken on a steady course. If you succeed, however, you’ll reach the second stage: space. 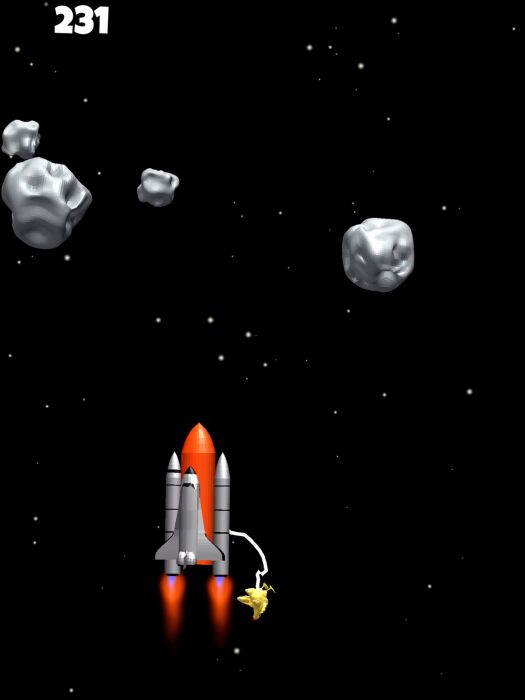 There are no bubbles in space. We’re not sure if this is due to the laws of physics, but the upshot is that your chicken is now swinging by a rope attached to a rocket. Satellites, meteors, and other deadly space things are criss-crossing the screen, and you have to dodge them by guiding the rocket with your finger.

If you make it through space you’ll get to heaven. Unfortunately it’s human heaven, where animals are not allowed, so you’re back to bouncing upwards on bubbles, this time avoiding and/or attacking angels, arrows, and bibles.

We’ll be honest: we didn’t make it all the way to heaven through skill. We resorted to unlocking all three levels with an IAP, because ChickenPOP! is incredibly hard. Other IAPs include three extra characters — a rooster, a chicken in a space suit, and a baby chick — and no ads. 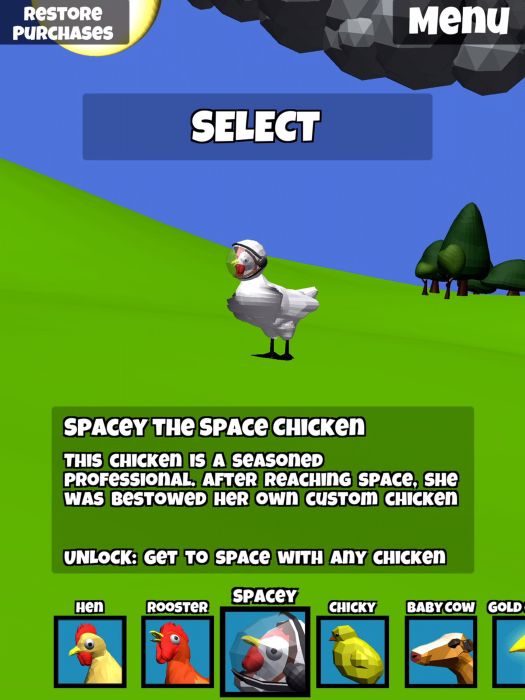 The difficulty of ChickenPOP! is a mixed blessing. It can feel downright frustrating to be knocked off course on a good run with no prospect of recovery, however many bubbles you desperately produce to break your chicken’s fall.

But with that comes the satisfaction of gradually getting better at the game and enjoying the odd run of luck.

The presentation is equally mixed. ChickenPOP! looks basic in some areas, such as the garish menu screen, but the chicken sprites themselves are beautifully rendered, and look hilarious as they flail helplessly around like feathery ragdolls.

If you want to see heaven you’ll probably have to pay, but there’s fun to be had in the hellishly difficult free version too. For all its faults, ChickenPOP! is fun, funny, challenging, and worth a look.

You can download ChickenPOP! for free now on Google Play and the App Store.