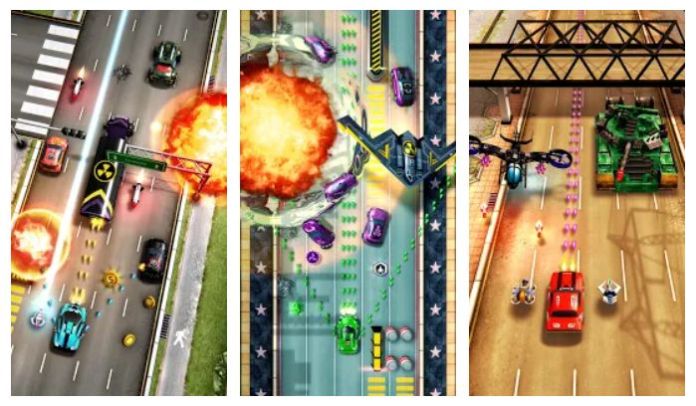 Chaos Road: Combat Racing is an adrenaline-filled driving game that gets you hooked instantly. And if you need some extra to get better, we’re here to help with some Chaos Road tips and cheats in our complete guide to the game.

Shoot, dodge, collect powerups and defeat bosses, upgrade your vehicle and buy new cars… there’s a ton of stuff that you can do in Chaos Road for mobile and you’ll never get bored. And even though things are relatively straightforward in this game, a bit of help never hurts, right?

So let’s check out some Chaos Road: Combat Racing tips below in our game guide.

Early on in the game, your focus shouldn’t be on maxing out those Car Upgrades first, but investing some money on the Power-ups. You can level them up from the main screen of the game, before starting a race.

Power-ups are a really useful long term investment. You will change your vehicle to a better one after defeating the Skull gang, but the power-up upgrades will stick for the remainder of the game.

Apart from your Fighter upgrade which is a no brainer, I think you should level up those power-ups in this order: Super Shot, Ultra, Double Chaos, Bullet Time, Heal and Magnet.

Heal is very useful, but you’re getting it on very, very few occasions, so it’s not really worth spending too much money on it, especially early on when you don’t have a lot to play with anyway.

There isn’t any point in leveling up your basic car too much – the Classic car, that is. You will upgrade it sooner rather than later, buying the Cobra vehicle as soon as you defeat the first gang (so make sure to have the 30 Gems saved up for it!)

Each new car deals more damage and is generally better than the previous one, with the Classic car being the weakest of them all. Therefore, no sense in spending too much on it.

I personally managed to beat the final boss with just 6 levels in the main weapon, and 5 in each of the Side Weapon and Armor. Anything extra is money wasted, but if you have a lot of coins, you’ll definitely have an easier job with the missions.

But realistically, there’s no need to upgrade a car you won’t play much with anyway, right? Save your coins for the Cobra and power-ups instead and only invest exactly as much as is needed for you to complete that early stage in the game.

Complete the daily and main missions

Chaos Road challenges you with a bunch of missions that you have to complete in order to get some really nice rewards. These are the regular missions that refresh after you complete them.

You also have a Main Mission, which is actually a series of missions that you must complete in a limited amount of time for some even better rewards.

All these missions will basically be completed by simply playing the game as much as possible, but it doesn’t hurt to actually look at what you have to do as it make sit easier for you to decide what to prioritize in terms of destruction or collecting during the races.

Defeat all rivals before beating the boss

Strangely, once you defeat a boss, you can’t go back and take on them once more. This means that if you don’t manage to defeat the rivals (the other mini-bosses before you get to the main one), you won’t be able to do so later.

This further means that you won’t be able to collect the rewards for defeating them, which would be a big loss since these rewards are pretty substantial.

Therefore, make sure that before reaching a boss and defeating them, you have destroyed all the other rivals AND collected their character token in order to be rewarded.

If you missed one (or more, like I did before knowing this), simply let your vehicle be destroyed and start over. You really need those rewards!

Below, I will share with you some additional tips and tricks that you should have in mind when in the driving part of Chaos Road. All these tips will help you perform better and get farther in the race, ready to defeat your opponent.

1. Take out enemies that shoot at you first. While one enemy might be dodge-able, if you have two or more on the track – with other vehicles along the way – you’re probably going to crash fast.

2. Lift the finger off the screen to pause the game. You will also see your current missions this way and get a chance to regain focus if things get too crowded.

3. Focus on picking up the power-ups, but make sure that you prioritize if things are too crowded: the best ones are those that give you an instant advantage, like the speed one, the slow motion and so on.

All are good, but if you have to choose between healing when you’re low on health and the magnet – if you can’t pick up both due to the on-screen situation – then you should definitely go for the former.

4. Keep an eye on all indicators on the screen. Flashing lines mark an upcoming missile, while various road markings announce road blocks and other obstacles on the track. Based on these details, adjust your position on the road accordingly.

5. Try to stay in the middle of the road – this way, you have more options to roam around and escape various enemies, but also take out more vehicles with your side weapons.

A good strategy – as much as space permits – is to swipe your finger on the screen from one side to another in order to deal as much damage as possible – your main weapon is the main damage dealer here, so take advantage of it!

6. Learn what power-up each vehicle gives you, to prioritize which to take out first if you can actually make such a choice. For example, ambulances give you a healing power-up, those money cars give you more money and so on.

As fun as it is to play the game, as difficult it is to get the resources you need to actually buy those upgrades.

Premium currency (like Gems and parts for the Drone Chests) are the most difficult to get, but every now and then you will get an offer to watch a video ad for some Gems or Drone Parts. Take advantage of these offers as they will make your life in the game a lot easier!

These would be our Chaos Road tips and tricks. If you have additional advice for fellow players, don’t hesitate to post a comment below, so that the entire world can see it.