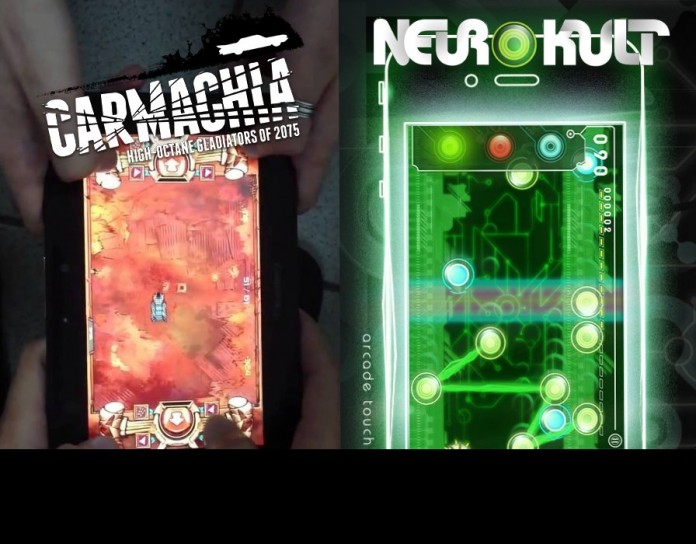 Two new upcoming iOS games have recently stolen the spotlight, and it looks they’ll do it again when they’re released. And for good reasons too.

Carmachia: High-Octane Gladiators of 2075 (that’s a mouthful, so let’s just call it Carmachia) is a competitive single-device multiplayer game in which you and a friend can battle it out like men… or like cars. Carmachia really takes advantage of the size of an iPad, as well as the quality of the device. The trailer for the game boasts its wide variety of selections for you: fourteen cars to keep you occupied, six power-ups to give you a helping hand, and three game modes (survival, coliseum and shootout). Carmachia is due for release soon on 10 October for $1.99, and if the game is anywhere near as good as it looks in the trailer, then it is definitely worth the price.

Neurokult has been described as the child of Polara, REZ and Bejeweled, in the way that the player’s ability to stay focused is constantly challenged and their survival reactions are pushed to the test. The game requires quick reactions and intuition. Set in a cyberpunk universe, the game comes with handcrafted effects, and even a unique and beautiful soundtrack by Austrian artist Mekoor. These elements result in an immersive audio-visual journey. According to the developers, you are a voyager immerging into an uncharted neurospace. On your journey, you are confronted with defense mechanisms, neurobombs and nerve-racking boss battles that vary in every state. The constantly changing patterns and gameplay variations force you to adapt your strategy and improve your reactions permanently. Neurokult is due for release on 17 October for $1.99 (€1.59, £1.29), and if you’ve seen the trailer, then I can guarantee that, like Carmachia, the game is definitely worth the price.

Despite their vast differences, there is one thing that these two games have in common: they both look absolutely beautiful and enjoyable, and  I can guarantee that paying $1.99 will feel like money well spent.