Your journey into the forest dungeon starts here in Tiny Decks & Dungeons, a new roguelite game with card collecting and monster battling elements mixed in. Build your own strategy and conquer the dungeon using your courage, wits, and a little bit of good luck!

In Tiny Decks & Dungeons, battles play out on a tile-based environment. Simply moving and attack is turned on its head here, as your weapons will dictate how you assault your enemies. A sword, for example, will attack enemies around you in a diamond formation, while a bow will attack enemies in a V-shape.

As you progress through the dungeon, you will earn new equipment cards that you can choose from on your next dungeon run. You can collect different weapons and even combine them to upgrade your favorites.

On your dungeon crawls, you will also come across many different types of ferocious monsters. However, when you defeat a monster, there is a chance it may want to join your team. You can bring captured monsters back to your village to raise and breed them to build the ultimate team!

Tiny Decks & Dungeons also features a PvP mode where you can battle other players’ decks and monsters and see who has the better setup. Who will come out on top? 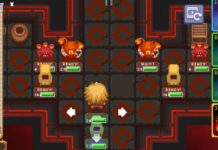